Each legislative session, we provide the Shawnee Mission area’s elected officials with the chance to share their thoughts about what’s happening in the state capitol. Rep. Jerry Stogsdill submits his update this week:

With the Veto Session starting on May 1, there is still plenty of work ahead in order to complete the session by our projected May 15 adjournment date. It has been a frustrating session this year having to work around the House leadership’s obstruction of bills getting out of committee or before the entire House for debate and votes. Still we have had some successes that we can point to with pride. They include:

School Finance: Under the leadership of new Democratic Governor Laura Kelly we were able to send to her desk a school finance bill that looks like it will satisfy the Kansas Constitution’s requirement for the equitable and adequate funding of our public schools. The Kansas Supreme Court will make the final decision on the issue but this is the best bill that has been put forward in at least eight years and it is good news for our children and our economy.

Medicaid Expansion: The House did its job and passed Medicaid expansion through the House and moved the issue over to the Senate. Unfortunately Senate President Susan Wagle and Senate Majority Leader Jim Denning seem determined to NOT let this issue out for debate and a vote by the entire Senate. They apparently want to continue with the Brownback policy of sending our tax money to Washington to pay for Medicaid in other states that have voted for expansion. Hopefully, the Senate will be able to form a coalition between all the Democrats and moderate Republicans to get the issue passed and on to the Governor.

It was a proud moment when all the Democrats and a significant number of moderate Republicans formed a coalition to pass this much needed program through the House. Hopefully we will see more of this cooperation in the Veto session.

HB 2345: This bill has not yet passed out of the Tax Committee that Representative Clayton and I serve on but it is a much needed bill and we will both be working on getting this through Committee and on to the full House for a vote. This bill would allow local units of government to reduce their mill levies to give tax payers property tax relief when property assessments go up significantly like they have in Johnson County. The bill also allows a local unit of government to raise the mill levy back to its original level, a level which was previously approved by the tax payers, within five years if there is an emergency and do so without holding a special election. After the five years it would take another special election to get tax payer approval to raise the mill levy above its previous level. This would give the cities in the 21st District a much needed way to lower our property taxes while retaining a way to address an emergency situation. For some reason Republican leadership has been very lukewarm to this idea but we will be pressing to see that it is included in the final tax bill.

Again, there is much to be done before we adjourn for the year and I will have a full report for my constituents immediately following the Session. As always if you have a question or suggestion for me please don’t hesitate to get in touch. Until May 1, when we return to Topeka, the best way to get in touch is e-mailing me at jws4414@aol.com. Thanks for all your support. 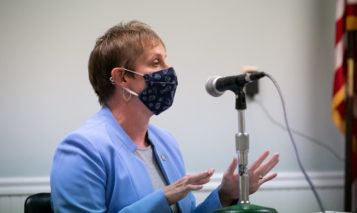