Shawnee residents came to the city’s first informational meeting on the proposed community center and property tax increase with several questions about finances.

Wednesday’s session at the Shawnee Civic Center was one of two chances for residents to learn more about the proposed facility and its amenities, what a property tax increase would look like for homeowners, and the mail-in ballot initiative, which ultimately puts the whole project to a vote by residents.

Much of the conversation at Wednesday’s meeting, which drew around 100 attendees, focused on the financial projections related to the project — from the total cost of construction to the price of memberships to the impact on property taxes.

The most vocal concerns about the project were raised by some of the oldest attendees at the meeting, who wanted specifics on how the project would affect their fixed income budgets. On the other hand, many recently retired individuals and parents of young children spoke in support of the project.

At the meeting, members of the citizens group that has organized against the proposal pressed the representatives from the city —  deputy parks and recreation director Tonya Lecuru and assistant city manager Caitlin Gard — about the language used on the ballot, and whether the city had done enough to communicate to voters that the $38 million construction cost did not include the financing fees the city will incur to issue bonds for the project, costs that would push the total expense around $50 million. Lecuru likened the $38 million to the purchase price on a house, and the total cost to what a purchaser would pay when getting financing for a mortgage.

Here’s a breakdown of the budget presented by the city Wednesday: 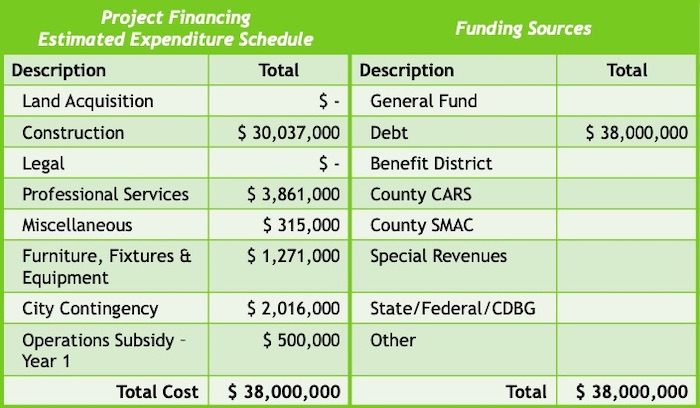 City staff said a property tax — which would not have a sunset date — would be a more stable revenue source to fund construction of the community center than a sales tax. Staff expect the property tax rate to increase by 2.919 mills. Gard said renters may see an increase in their rent if property owners choose to pass along the costs.

Here’s a look at what the proposed property tax increase would mean for the home owners, based on today’s dollars:

Staff said the community center would operate at a loss for at least the first five years while the community center grows revenue from memberships, daily fees, rentals and programming. The goal is to break even, not necessarily turn a profit, Lecuru said. The city would make up for the budget deficit through general funds earmarked for parks and recreation. Lecuru said the estimates are based on conservative expenses and revenues (like a worst-case scenario). Here’s a look at the numbers:

And here are the anticipated membership costs for Shawnee residents:

Staff said operating expenses for the center would mostly cover personnel costs as well as contractual services, commodities and capital expense planning. Staff determined that offering a flat membership fee to provide full access to the facility — instead of a tiered membership where residents would pay more to access more services — would be better for residents.

Ray Erlichman, a vocal presence on many city council issues who has organized opposition to the community center and property tax increase, said he thought the city was trying to hide the fact that the community center would have a budget deficit for the first five years it’s open. Lecuru said staff is working to provide as much information as possible for residents moving forward.

One resident asked if the community center’s fitness components would compete with private fitness centers and run them out of business. Lecuru said the community center would serve more than just fitness purposes and is meant to provide a service for “the whole family.”

The second informational meeting will take place from 6 to 7:30 p.m. April 29 at Monticello Library.

Full video from Monday’s meeting is embedded below: