Her book, “Returned and Reborn: A Tale of a Korean Orphan Boy” is a historical fiction about an orphan boy born to a Korean single mother and a white, American Jesuit priest. The boy didn’t know his identity when he was adopted by American parents, so he eventually came back to South Korea to find his roots.

The journey of Park’s protagonist draws from the experiences of more than 200,000 orphans who were adopted into families outside of South Korea. These children were mostly born out of wedlock, or had mixed heritage or perhaps birth defects.

“It is another atrocity that South Korea committed to young, innocent children,” she said, adding that Korean society has looked down on single mothers or children with birth defects.

Park said she took inspiration from a New York Times article about Koreans who were adopted out of their country and returned as adults to resettle in their home country.

“They were not really accepted to American parents, so they wanted to make a home (in Korea), no matter how difficult it was,” she said. “That moved me.”

Born as Suh Gye-sun, Park also has a Japanese name, a remnant of the time when Japan occupied Korea in the first half of the 20th century. Coming from deep Catholic roots, she was given a Catholic name after St. Thérèse of Lisieux, a Carmelite nun from France.

Park immigrated to Kansas City in 1966 to perform as a cellist with the Kansas City Philharmonic. She continued playing for the next three decades, right through the symphony’s bankruptcy and rebranding into the Kansas City Symphony.

Storytelling about injustice and the Korean experience 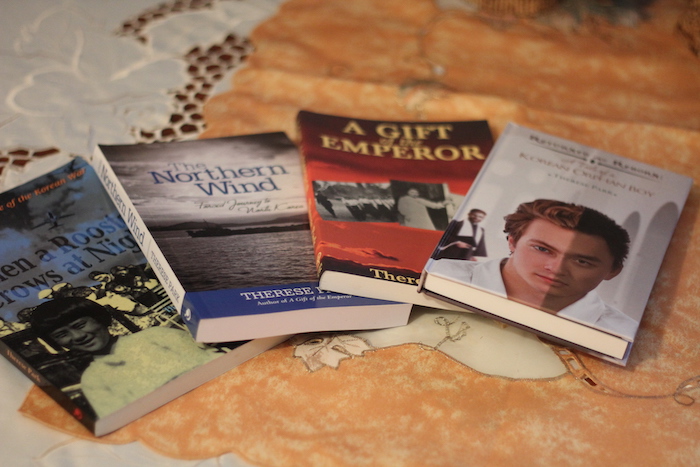 Now 78 years old, Park enjoys carving wood sculptures and volunteering to play for other symphonies as well. A former guest columnist for the Kansas City Star, she has also published other historical fiction books:

Park lived in Korea during Japanese occupation and also through the Korean War. As such, much of her published work centers around her shared experience of human suffering and injustice in Korea.

“As a child, I saw so many unjust done to women and also minors. For instance, at school, we were constantly punished for small things; the adults were rough to us,” she said. “Things like that are in my bones. I see unjust all the time. I see them as a part of me.”

Park is about halfway through another historical fiction based on the human rights abuses committed by South Korea when it hosted the 1988 Olympics. The South Korean government rounded up beggars, handicapped and homeless people and hid them away in shelters during the Olympics. Many people were abused and killed by the government in that time.

“It has to come out; nobody knew about it,” she said. “Nobody was really charged what they deserved.”

“Returned and Reborn: A Tale of a Korean Orphan Boy” is available for purchase at Barnes and Noble and on Amazon, and is also available to order from Rainy Day Books in Fairway.