Shawnee Mission School District administrators told the board of education on Monday that they plan to come back with a set of proposed tweaks to the policy that guarantees a full lunch to every student after seeing the district’s liability for unpaid meals continue to rise since implementation.

Shawnee Mission became the first school district in Johnson County to guarantee a full meal to students regardless of the balance in their lunch accounts when members of the board of education approved the policy this fall, saying they were concerned about the social and physical effects of giving a toasted cheese sandwich and milk in lieu of a full meal to children who didn’t have enough money in their accounts.

But since implementation in November, the district has seen the total negative balance carried on students’ lunch accounts balloon from about $6,000 to approximately $16,500 as of March 8.

On Monday, Assistant Superintendent for Operational Support Rick Atha and Director of Food Services Nancy Coughenour provided another update on the policy, noting the concerns they raised about growing debt last month persist. Atha said the district entered the new policy with the understanding that it would have to be cost neutral, as the district did not have funds allocated to cover the growing debt.

Atha presented a slide providing a snapshot of where the negative balances came from at one point this year: 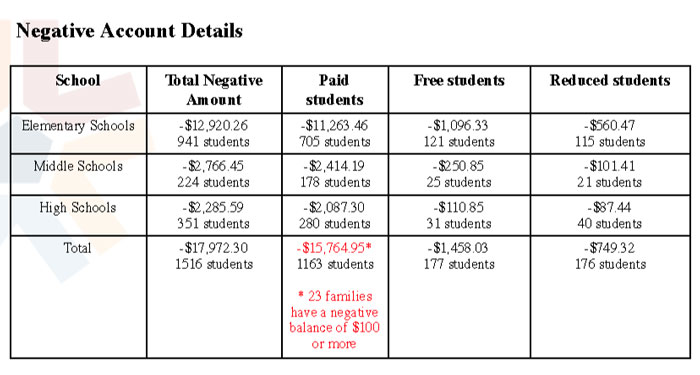 “These are needy families,” Atha said. “These are kids many times that don’t know where their next meal is coming from. These are kids that maybe their best meal comes from the Shawnee Mission School District. These kids are not where the problem is in this policy.”

Instead, the issue appears to be coming from families that have the ability to pay — but have not been. Coughenour said her staff had been working on strategies for getting families whose students had significant negative balances to bring the accounts current. Food services staff are making personal calls to families of students with negative balances of $60 or more.

Laura Guy, the SM West area representative on the board and a supporter of the policy, said that part of the issue may be that parents don’t yet realize that they are being held responsible for the meals their students are getting. Under the previous policy, the student would receive the toasted cheese sandwich and milk without a debt showing on the lunch account.

“That’s one of my suspicions is that perhaps since there was not a financial penalty for parents not to pay or to forget to pay in the past, that they aren’t understanding this is a new policy,” Guy said, “and that even though they aren’t sending money in, the daily debts of the lunches that the students have are adding up.”

Heather Ousley, an at-large member and the board vice president, said that while the numbers are concerning, the cost for meals had likely been born in other place prior to the district setting a new policy. In the past, she said, teachers would pay for a full lunch for students who couldn’t afford it because they felt bad about having the child’s lack of lunch money made obvious to peers.

“These expenses have likely been accumulating,” Ousley said. “We’ve just been not dealing with them on the district side. It’s been piecemeal through the efforts of individuals throughout the district. So, I certainly wouldn’t want to once again place that sort of burden on our educators who might feel bad…”

Atha and Coughenour plan to present recommendations for changes to the policy next month.