It’ll be 10 years this month since Meg (Blake) Young joined the foreign service. As a diplomat for the United States government, she has toured in Shanghai, China, and Lisbon, Portugal. Some of her most rewarding work for the State Department was helping explain to the public U.S. policies involving Afghanistan and Pakistan issues between 2012 and 2014, handling serious cases such as child abductions, and problem-solving with Americans in the midst of a birth or death overseas. A speaker of Chinese, Spanish and Portuguese, she now works for the office of policy planning in Washington, D.C. Young grew up in Lake Quivira and graduated with the Class of 1997 at Shawnee Mission Northwest. She and her husband, Ryan Young, have two children: an 8-year-old son who was born in China and a 6-year-old daughter born in Virginia.

For me, this is a dream job. There is nothing in the world I would rather be doing than serving my country and representing the United States abroad. Our job as foreign service officers is to protect and advance American interests and ensure that Americans are safe.

When I joined the State Department, I didn’t really know what that was going to be like. But once you get over there and you’re sitting in a visa window and you are the face of America to a visa candidate, you’re it. When I was in Shanghai and I was doing, you know, 120 visa interviews a day, those people probably aren’t going to have much contact with another American. And so how I interact with them — even if I’m telling them “no” — matters, and it shapes how they perceive our country. That’s an important responsibility and something that foreign service officers take very seriously.

And because we are the faces sitting at the windows talking to folks, it’s important that, you know, the diversity of America be reflected in those faces. That means geographic diversity too, you know, so it was also important to me to be somebody from Kansas. Because there’s a lot of people who are in the foreign service who maybe their families were in or they’ve got ties or it seemed like a possible job for them. But for me as a kid from Kansas, it didn’t occur to me. And so I hope people who read this think about it as an opportunity or as a possibility, as a way to serve their country.

My last tour overseas was in Portugal. One of the things we were trying to do was to increase outreach and connection to the center of the country. Because I’m from the center of a country — an area where agriculture’s important, an area that can see some of the challenges of not having the same investment as the coasts and is looking for creative ways to address those challenges — I could go in and talk with those people with some credibility and legitimacy and empathy because I grew up with that here. A quote-unquote flyover state, what it feels like to be from that kind of place, was something I could bring to these conversations.

If people are thinking about the State Department as a career choice, I don’t want them to just think that it’s all some sort of high-diplomacy thing. There are so many different ways to serve your country in the State Department. We have IT professionals. We need doctors and psychiatrists; they are looking now to fill more gaps there because we have regional medical officers and regional psychiatrists who support our missions abroad. We have buildings operations people. We have human resources officers. There are so many ways to come into the State Department, and I would encourage people, if you’re interested in serving your country abroad, look at careers.state.gov. It’s an incredible opportunity and an incredible honor to get to go and represent the United States. 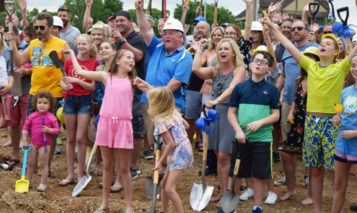