Lenexa is wrapping up the research for its Complete Streets program.

In an effort to create a cohesive plan for all types of transportation in the city, Lenexa has been working for the past several months on a program that identifies needs of motorists, cyclists, public transit users, pedestrians and trail-hikers.

The city hosted its final workshop Thursday evening at Thompson Barn, taking the opportunity to present its findings so far and collect additional feedback from residents. 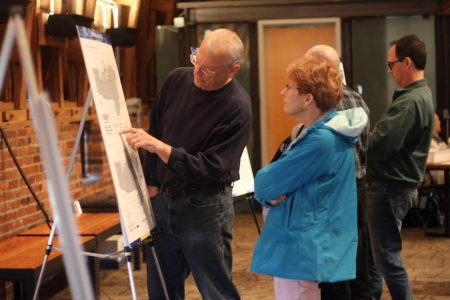 “We’ve gotten a lot of comments from the public, and so we’ve put that all together to come up with some ideas,” said Steve Schooley, transportation manager. “We don’t have a completed plan yet, but we’ve got a lot of ideas and information to be able to put together a plan.”

Lenexa and Olsson & Associates, a contractor for the program research, have been collecting data since the program kicked off in October. The city also hired Olathe-based ETC Institute to conduct a statistically valid survey of 768 residents in January.

Schooley said the city has collected feedback from a “diverse set of interests,” but none of the results have been particularly shocking. Project research and resident feedback have flagged all of the areas where people frequently travel as well as gaps in the system where there are no sidewalks or bicycle lanes. Some residents want an extensive trail network; others have asked for on-road bicycle lanes; still others hope to complete pedestrian paths across the city.

“The challenge is how do we balance all of those needs and desires?” he said, adding that resident feedback was occasionally contradictory, with some people wanting bike lanes and others not wanting any.

Here’s a look at some of the findings — although this graph will be updated after staff includes yesterday’s feedback from residents: 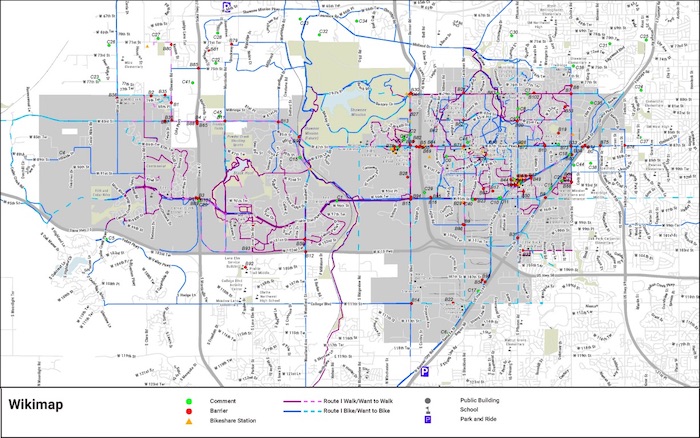 City staff are also considering prospective commercial and residential development as they develop the Complete Streets program — the goal being to create guidelines for a complete transportation network that ties in well with future growth.

“I think the benefit of the whole plan is having a plan we can refer to as we build projects in our city,” he said. “Say we rebuild Pflumm; well, if we’ve got a plan of what we need to be doing with that, then we can follow that and it will all fit together eventually as projects are built.”

Once they sort through the data collected yesterday, city staff members will begin developing the Complete Streets plan and present it to the city council for final approval. Schooley expects the initial plan will be complete in the next month or two, but it can always evolve as the city gets new information on best practices in transportation or any new feedback from residents.

Meanwhile, other aspects of citywide transportation are already underway. The council on Tuesday approved a bike share program that sets up rentable bike stations across the city.