A new seven-unit apartment complex on West 77th Street in Lenexa is in the works.

The Lenexa council voted 7-0 to approve a preliminary plan for Timber Apartments, which would be built at 11700 W. 77th St. The undeveloped piece of land lies north of West 77th Street and east of Quivira Road, between a daycare facility and a single-family residence. Councilmember Steve Lemons was absent.

Originally, the one-acre parcel was earmarked in 1979 as part of the plans for the Lenexa Plaza Shopping Center at the northeast corner of Quivira Road and 77th Street, according to a city memo. The site would have included a 5,700-square-foot office building with 32 parking spaces.

City staff reported that a gas pipeline easement bisecting the property has made it challenging to develop the property, even though developers have shown interest.

One of those developers was Tom Nolte, who now serves as councilmember, who reflected on his attempts to develop the site several years ago. He called the apartment complex plan “a perfect transition piece” between residential and commercial on either side of the site.

“I am so pleased to see this design,” Nolte said. “This is a great concept, what I would call alternative housing. This is not your traditional apartments. We’ve seen some real creativity in trying to get the parking work.”

Here is a rendering of the site from the south: 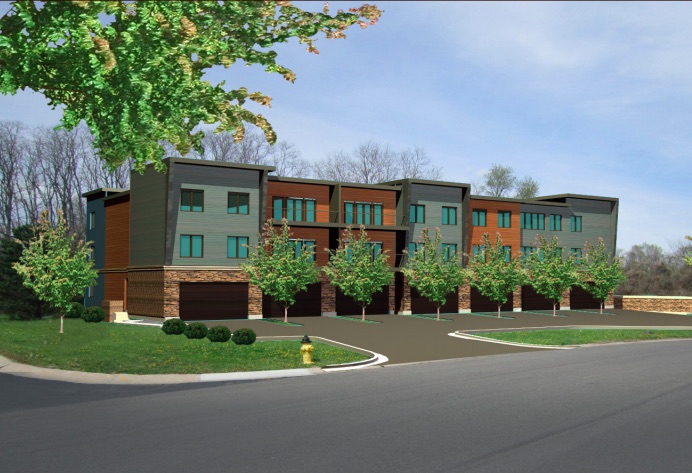 The proposed project has a density of 7.6 units per acre, with the apartments ranging in size from 1,773 to 2,393 square feet. The apartment units will each have three bedrooms, three bathrooms and a two-car garage. Additionally, all units will have space to park at least two vehicles outside of the garage.

The council also accepted deviations from city code, which allow the patios in the back of the apartment complex to encroach into the rear setback on the north side of the property. City staff indicated that a dense treeline may lessen the impact of this deviation.

The property north of the site is undeveloped and lies in Shawnee.