Brookwood Elementary students had a treat waiting for them when they returned to classes from Spring Break this morning: A brand new school in Leawood.

Designed by Hollis + Miller Architects, the new school at 3411 W. 103rd St. features energy efficiency and natural learning environments throughout the building, features that were top considerations in the design, shape and layout of the school.

Each of the classrooms, “special” rooms (such as the STEM-focused makerspace, library, music room and gymnasium) feature open-air concepts, natural lighting and ample storage and cubbyholes. The special rooms are all located on one side of the building so the noise doesn’t disrupt regular classes.

Students, faculty and some parents also had input in some aspects of the design, including a mural in the library and some of the various furnishings and flexible seating options.

Plans for the new elementary school have been in the works since the Shawnee Mission School District announced in 2016 that it would replace the school because its facilities no longer met federal codes. The original Brookwood Elementary was built in 1960.

The district has rebuilt five schools and constructed a sixth with part of the proceeds from the $233 million bond issue Shawnee Mission area voters approved in 2015. District communications staff said the district spent $19 million on the new Brookwood school and has not gone over budget.

‘Getting them ready for the future’

Kelsey Ripley, a first-grade teacher at Brookwood, said she hopes the flexible seating and natural lighting will give her students the options to learn in whatever environment helps them most.

“It was very old; my air conditioning actually broke twice while I was there,” Ripley said of her old classroom before the building was demolished. “It just was not conducive to learning nowadays. This space just means so much to them. It’s getting them ready for the future.”

Frick said Hollis + Miller did a nice job designing the space for children’s use, especially by activating all spaces of the building, not just classrooms but also the hallways. 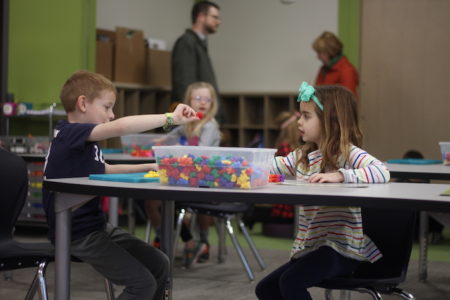 “Having a building like this with the windows and the natural light makes it a lot more inviting too,” Frick said. “I remember the staff came over here the first time and were just blown away. Everyone feels more positive; there’s more life to it than just an old-school 1960s building where there’s just walls and doors and that’s all there is to it.”

The hallways feature activated learning spaces with tiered seating areas, platforms (that will soon have bean bags and other cushioned seating), whiteboards and powered screen for online/digital learning. Plus, the school now has its own full kitchen and dedicated space for both the cafeteria and gymnasium.

Some parts of the new Brookwood are also nearing completion, including the makerspace for STEM (science, technology, engineering and mathematics). Due to the freeze-thaw cycle of this winter’s weather, the green space for the soccer field behind the school is not quite sodded and ready for use, but students can now enjoy the asphalt courts and new playgrounds with turf and handicap accessibility. Frick said the facility and walking trail around the outdoor play area are intended for community use.

And soon, the school will partner with Johnson County Park & Recreation District and begin using the school’s new preschool classroom as well.

“For a principal, this is the dream,” Frick said, adding that he’s excited for the new opportunities for students and staff as they explore their new space. “I think it just inspires the staff to do great things.”