A transition zone between Overland Park’s downtown apartments and single-family homes to the east began to take shape this week, as planning commissioners gave the okay to a small development of townhomes near Avenue 80.

The rezoning would allow developer Skyline Properties to put an enclave of four buildings on 1.5 acres at 6800 W. 80th Street. The development, which has the look of terraced, gabled row houses, would have 18 units. Two vacant houses are on the property.

Here’s a look at an early elevation drawing of the proposed properties: 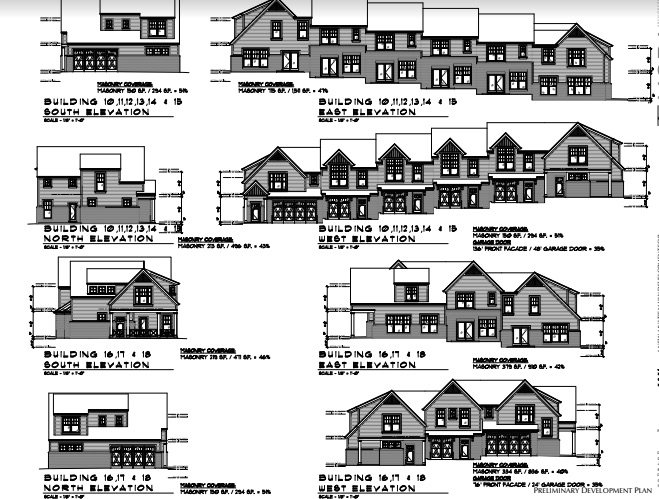 The property sits just outside of the downtown area that has been spotlighted for denser apartments and mixed use projects on the west. It lies next to the Ad Astra office building and Danish Village apartments on one side and traditional single family homes on the other.

“We are very close to all the excitement and energy downtown,” said lawyer Aaron March, representing the developer.

The development, on either side of a short access street, has the look of gabled, terraced row houses. They were designed to harmonize with the neighborhood, using neighbors’ input, March said.

Concerns about density, traffic and setbacks

However not everyone was happy. Some citizens weighed in about the density, traffic and setbacks. Todd Baker, who lives across 80th Street from the proposed development, said he would have preferred fewer tenants on that amount of land.

“In my opinion it’s just too much,” he said, suggesting a cul-de-sac as a possible alternative. “I think it’s a detriment to the neighborhood being this dense.”

Carol Kelly, of Overland Park, said she was concerned about the development even though she doesn’t live in the immediate area. The addition of another development will only add to traffic along Metcalf Avenue, she said, which is already too busy.

Neighbor Mark Fisk, who lives just east of the property, said, “From everything we can see about it, we’re in favor of it.” However he cautioned city officials not to make the building setbacks any narrower.

Commissioners had some questions about the fact that a sidewalk is planned for only one side of the central street, but approved the rezoning necessary to get the project moving toward the full city council April 1.

“We saw this parcel as an opportunity to have a transition from single family to some uses on the west side of this property,” said commissioner David Hill.