Saint Ann Catholic Church leaders are trying to navigate a controversy after the parish school’s move to deny admission to the child of a same-sex couple sparked protest from hundreds of members.

In a Feb. 27 letter to parishioners provided to the Shawnee Mission Post Wednesday afternoon, Father Craig J. Maxim said that he had sought the advice of the Archdiocese of Kansas City in Kansas after the couple sought to enroll their child in kindergarten at Saint Ann Catholic School.

“To summarize, the Archdiocese states that since same sex unions are not in conformance with the Church’s teaching on sacramental marriage and these unions have no current ability to bring their relationship into conformity, the parents cannot model behaviors and attitudes consistent with the Church’s teaching,” Maxim wrote. “This creates a conflict for those children and what is experienced at home. It also could become a source of confusion for other school children. For these reasons, the Archdiocese advised against admission.”

“As your pastor, I am distressed over the division this sensitive and complex issue has caused within our school and church,” Maxim wrote.

In response, a group of Saint Ann families wrote a letter addressed to Archbishop Joseph Naumann and Superintendent Kathy O’Hara imploring the church to reconsider, saying that at Saint Ann “we are inclusive and try to refrain from judgment.” The online petition, which is dated March 1, had been signed by more than 1,000 people as of this writing.

“Respectfully, we believe that the decision to deny a child of God access to such a wonderful community and education, based on the notion that his or her parent’s union in not in accordance with the Church’s teaching in Sacramental marriage, lacks the compassion and mercy of Christ’s message,” reads the petition letter. “We ask you to consider the many ways that other modern marriages may be inconsistent with the Church’s teaching on Sacramental marriage (i.e. vasectomy, IVF, divorce, and remarriage without approved annulment). Further, St. Ann does accept non-Catholic children and families into our school. Presumably these families are not in marriages that are conformant to the teachings of the Church.”

The issue was first made public in a story published by the Kansas City Star on Wednesday, and has since attracted national attention from CBS News.

The controversy comes just days after local leaders of another Christian denomination vocally opposed the broader church’s move to uphold restrictions on LGBTQ individuals’ participation in aspects of the faith. United Methodist Church of the Resurrection Rev. Adam Hamilton, who founded and leads the largest Methodist congregation in the country, has indicated that his church and others are exploring options for future involvement with the Methodist church after delegates at the General Conference voted to exclude LGBTQ individuals from the clergy and to refuse recognition of same-sex marriages. Other Johnson County Methodist congregations, including Asbury United Methodist in Prairie Village, have indicated they may look at realignment as well.

In January, the Catholic Archdiocese of Kansas City in Kansas acknowledged an internal investigation had identified 22 priests credibly accused of sexual abuse of minors. 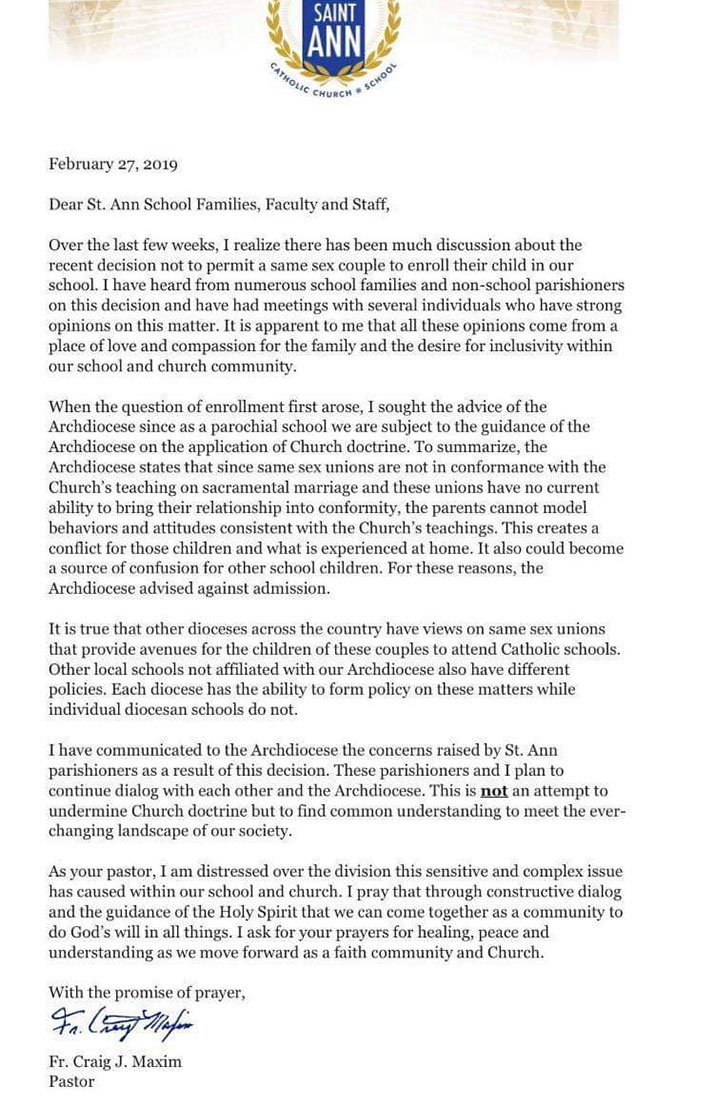 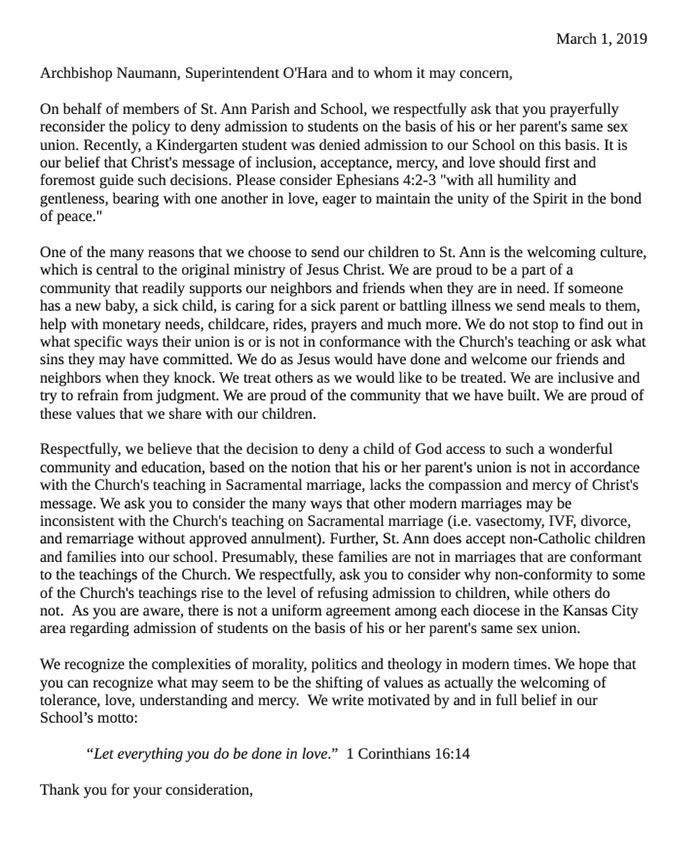