The parties involved in a lawsuit over a column published in the Kansas City Star continue to trade public barbs over the issue.

Attorney Michael Kuckelman and client Sen. Jim Denning of Overland Park today released new emails they say show columnist Steve Rose admitting that he should have stopped the column from being published and editorial page editor Colleen Nelson indicating the piece did not meet the newspaper’s editorial standards.

Meanwhile, Rose issued substantial public comment on the issue for the first time since the suit was filed.

In the column at the center of the dispute, Rose wrote that Denning had “finally confessed” his rationale for opposing Medicaid expansion in the state. In the suit, Denning said he hadn’t spoken to Rose since August 2016 and that he had never made the comments attributed to him in the story, including that “he resents able-bodied Kansans, regardless of their income, who abuse the system by accepting free medical care when they refuse to work.”

Denning is seeking damages of at least $75,000 plus his legal costs in the defamation claim.

On Friday, an attorney representing the Kansas City Star filed a petition seeking to have the claim thrown out, saying that Denning would not be able to prove “actual malice” and that the suit was a way to raise Kuckelman’s profile as he ran for state GOP chair.

In the information released today, Denning said the “public was misled by this column,” and that he and Kuckelman had decided to release additional emails because “It’s important for the public to have a full and complete narrative of the communications taking place behind the scenes that led me to sue not only The Kansas City Star, but also former columnist Steve Rose.”

The newly released emails are below. Ethan Patterson, who is involved in some of the correspondence, is Denning’s chief of staff: 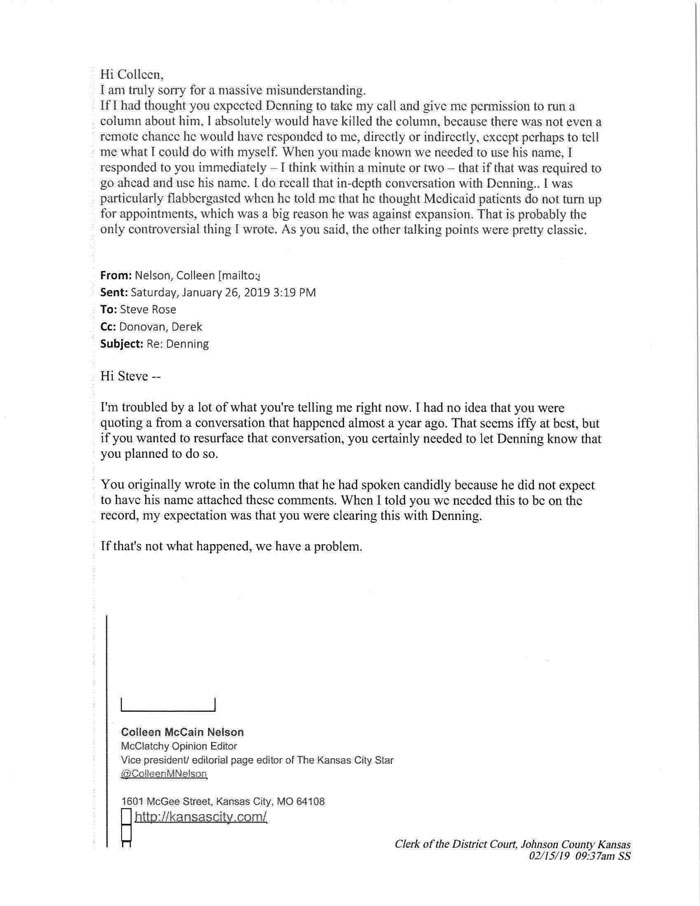 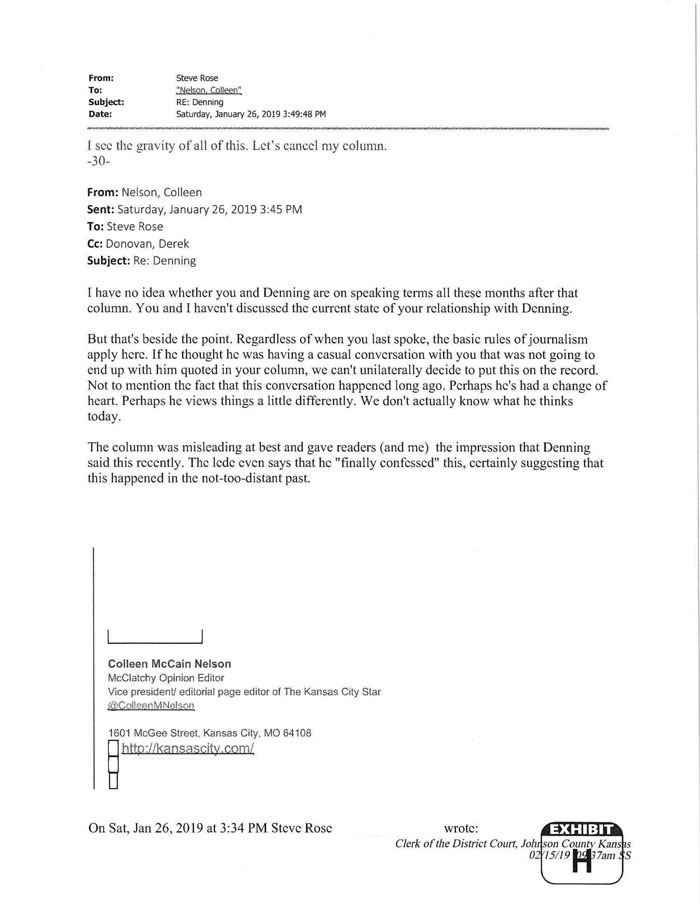 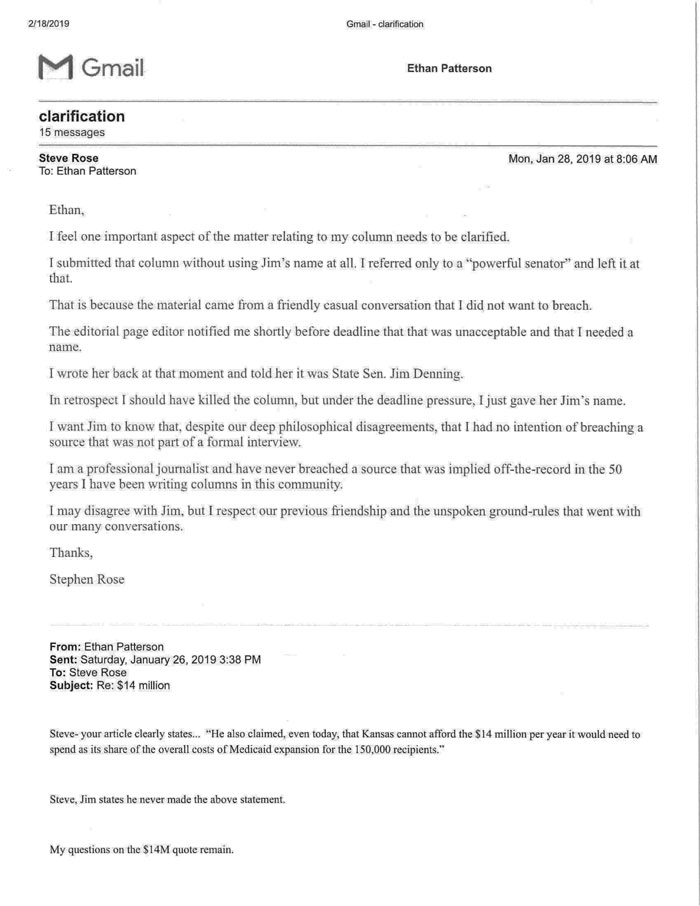 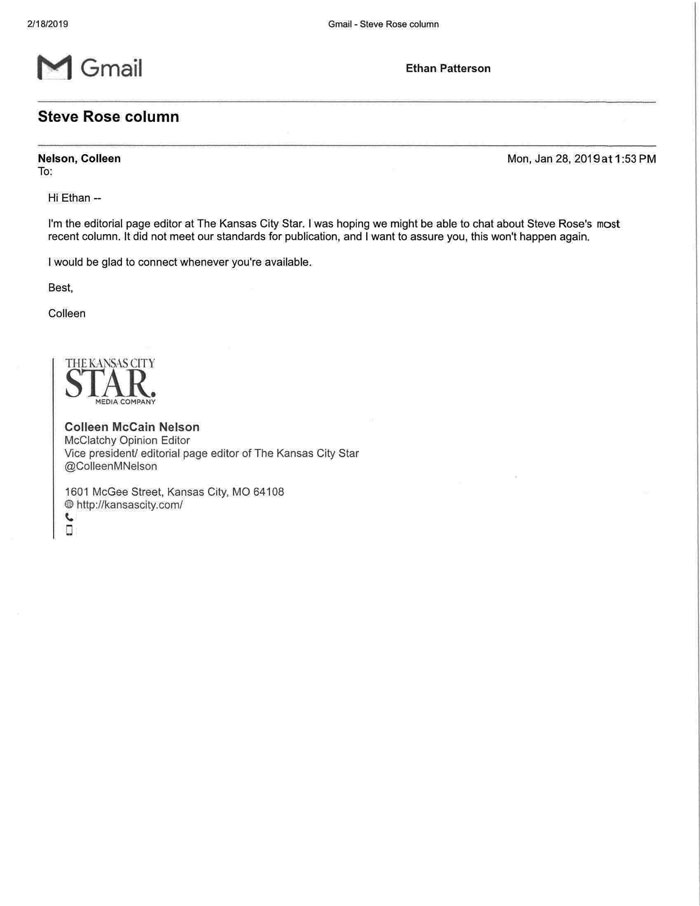 Kuckelman said the newspaper had yet to properly address the issue.

“The Star admits the column didn’t meet its editorial standards, yet The Star comes out swinging,” Kuckelman said of the Star’s petition filed last week. “We would expect The Star to talk with us about finding ways to correct its own error. Just taking the article down and offering for Steve Rose to resign isn’t nearly enough. Clearly, The Kansas City Star caused the damage, and it needs to make this right. The Star hasn’t even put out a retraction, which it should have done immediately after discovering this massive violation of editorial standards, not to mention the incredible lapse in journalistic integrity.”

In response to Kuckelman and Denning’s release of the new emails, attorney Bernie Rhodes, who is representing the Star, said that their “hypocrisy” continues, noting that Nelson had proactively reached out to Denning’s office to discuss the matter.

“The Star did reach out to Sen. Denning,” Rhodes said, “and he responded by filing a lawsuit.”

Moreover, Rhodes said, nothing that Denning or his attorney have released thus far show that Rose’s claims about his position on Medicaid expansion were inaccurate – and thus potentially defamatory.

“There is nothing in this release or any of the attachments they put out that get at the issue of ‘Does he support Medicaid expansion?'” Rhodes said. “Which is exactly the point.”

Rose issues statement, says Denning has ‘vendetta’ against him

For his part, Rose on Tuesday released a lengthy statement maintaining that Denning had made the comments attributed to him in the column, albeit “some time ago.” Rose said Denning’s legal actions were motivated by personal animosity after Rose publicly said he could no longer support Denning and that his performance in office had been “beyond disappointing.”

Jim Denning’s vendetta against me started in April 2018. That’s when, in a column published in the Kansas City Star, I publicly withdrew my political support for the Kansas state senator — now Majority Leader –after being longtime allies. It was a bombshell column that ended, “If Denning runs for re-election in 2020, I promise not to be fooled again.”

Is this why Denning cannot seem to remember our hour-long conversation at Houlihan’s restaurant in Fairway, Kansas, in which he made numerous arguments about why it was a bad idea to expand Medicaid, a program that provides health insurance for the needy? That conversation took place some time ago. However, I remember the words Denning spoke as if it were yesterday. I wrote a column recently about it, and Denning has now taken the heavy-handed approach of suing me over the column, attempting to divert public attention from his reasons for opposing Medicaid expansion.

The fact remains that Denning is a leading conservative voice in the Legislature, and there is no indication his position has changed since our discussion. He opposes Medicaid expansion vehemently and has said so publicly and very recently.

Most important, does Jim Denning truly not remember a comment he made to me that one reason expansion is a bad idea is that Medicaid patients typically do not show up for their appointments? When I asked him how he knew that, he said I could check with any physician who took Medicaid patients.

I don’t forget things like that, and I would never make it up. I did not falsely attribute any comments by him. I stuck strictly to the truth, as I have as a columnist for nearly 50 years.

In public statements he is making to draw attention to his lawsuit, Denning has emphasized that I offered to resign my column following publication, and that the Star decided to stop publishing my column.

To clarify, what troubled The Star is that the conversation with Denning was not as recent as the wording of the column may have implied, and they felt I should have clarified the timing of the discussion when final edits to the column were being made, which included naming the previously anonymous Denning as the source of the comments. That is why The Star has said the column did not meet their high standards. It was not an issue of misstating the substance of Denning’s statements or his reasons for opposing Medicaid expansion. As stated in the Star’s opposition to Denning’s lawsuit, “Mr. Rose’s column plainly did not distort Sen. Denning’s position as to Medicaid expansion. Sen. Denning has – and still does – oppose Medicaid expansion.”

In other words, what really matters in this case is not the exact timing of when Denning made his statements, but the fact that he made them, period.

With a naive hope that Denning would be satisfied that he had his revenge and would be satisfied by my resignation, I sent an email to Denning suggesting I would resign if he would just drop the whole matter. I was hopeful we could avoid a messy apology, clarification, or other fallout.

I said then, and I repeat now, of course I wish I had just killed the column. That would have eliminated the painful experience, which had nothing to do with the accuracy of the column.

If anyone’s reputation has been damaged by these events, it is mine. I have been accused by Denning of fabricating an entire meeting, of making up the points he clearly did make, and of somehow “ruining” his reputation as a public leader whose views – unless he states now otherwise – are precisely now as they were then. Denning has maligned me. He has twisted the truth to my detriment. His grandstanding publicity has given him the blood he sought, even though his allegations are totally absurd.

Above all, the suit has given Denning undoubtedly a thrill, and at the same time a cover for his refusal to expand Medicaid to low-income Kansans.