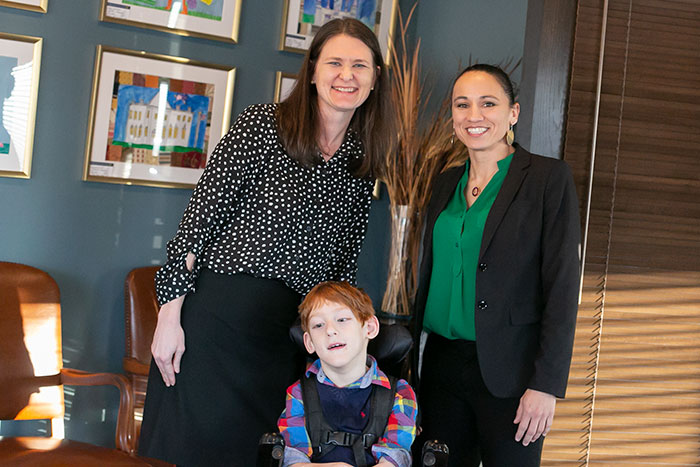 Born prematurely, Danny, now a 7-year-old student at Tomahawk Elementary, spent the first six days of his life in the neonatal intensive care unit. He was eventually diagnosed with cerebral palsy, cortical vision impairment and epilepsy.

During a typical week, Danny meets with a physical therapist, an occupational therapist, a speech therapist, and at least one of around a half dozen specialists monitoring different aspects of his health and care. As a result, Laura Robeson, Danny’s mother, has an acute understanding of how access to healthcare impacts families coping with serious medical issues.

So as she watched proposals that would have curtailed some of the protections offered under the Affordable Care Act being discussed by lawmakers in 2017, it hit very close to home. When the Graham-Cassidy bill, which would have resulted in significant cuts to the Medicaid program, started making its way through the Senate that fall, Robeson was among the activists who went to Sen. Jerry Moran’s Olathe office to lobby against the bill.

“I’m not sure why it is in this country we are asking mothers to justify why it is important to keep their children alive,” she told Moran’s staff.

Laura’s story, and her advocacy for continued protections for families like hers, are important for everyone to hear, says Rep. Sharice Davids. And for that reason, Davids will be hosting Robeson as her guest at tonight’s State of the Union address at the capitol.

Each member of Congress gets to invite one person as a guest to the State of the Union, and Davids said Robeson’s story highlights the real-life impacts of federal healthcare policy.

Robeson said that she and her family are grateful for the support they have in getting Danny care. But, she says, threats to the protections offered by the ACA do cause additional stresses in an already stressful situation.

“We have a really great life. We’re really lucky and really happy. But there is a certain amount of stress that goes into your day to day life, because you’re always just one virus or one seizure away from your life changing drastically,” Laura said of being parent to a child with serious health issues. “So there is definitely additional stress of having to worry about the things that keep him healthy going away.”