After months of revamping the century-old space in downtown Shawnee, Transport Brewery is a week away from opening. This is the first of four new microbreweries set to open in the Shawnee Mission area.

The owners said the intended atmosphere is casual, family-friendly and dog-friendly and featuring food and beverages from all-local vendors, including food trucks such as Cheesy Street and Taste of Kansas City BBQ + Grill. The space no longer looks like the attorney’s office it once was.

In preparation for opening day, the owners tore out and removed 20 tons of flooring and walls and redesigned the entire space in the roughly 100-year-old building.

“It had been remodeled about five times; in the past remodeling, they had put a layer over the last layer, so everywhere we took something down, we took five layers of things down,” McVey said. “Except the floor; there were seven of those, actually.”

Except for the roof and walls, everything in the space is brand-new, the owners said. Once all of that was complete, they could focus on what the entire operation is all about: brewing. The owners brewed roughly 35 barrels in preparation for opening day.

The owners also converted the former alleyway between the taproom and Aztec Theater into an indoor/outdoor patio space, complete with a garage door, strings of party lights and a mural-map of the Kansas territory on one wall.

“We’re all just excited; it’s been a long journey…for everybody, especially me now,” said general manager Christie Merandino. “It’s crunch time and we’re ready to open up, showcase our beer and have people have a good time.”

The owners also noted that brewery staff Elizabeth Towles and Alex Turner had been key parts of the team that pulled everything together. 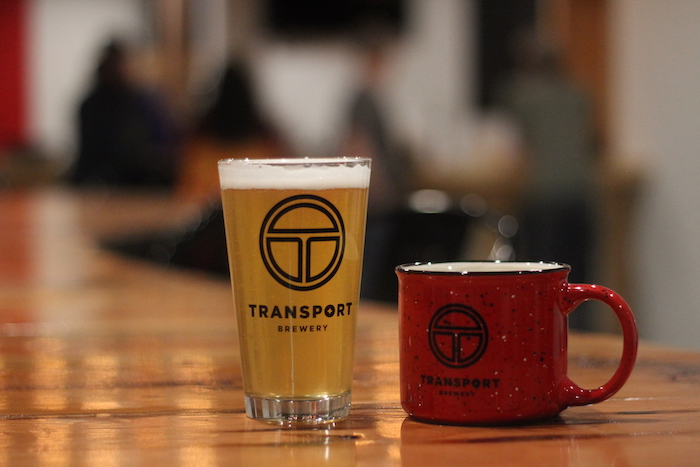 Transport Brewery will start with six to eight craft beers on tap — plus a few guest taps from local breweries. They will also sell locally-produced wine, ciders, kombucha and teas, juices and soft drinks, plus dog treats as well as snacks for humans. On the menu are several pale ales, fruited sour beers, a stout and coffee stout and a Belgian single; a few more craft beers are also in the works. They will also sell mugs featuring the Transport Brewery logo.

Merandino has other food-related plans to fulfill Johnson County’s 30 percent rule (where 30 percent of the brewery’s revenue must come from food and/or non-alcoholic drinks). She said she plans to invite local bakers, chocolatiers, popcorn makers and a constant stream of food trucks.

Transport Brewery will be open from 4 to 10 p.m. Wednesday and Thursday, noon to 11 p.m. Friday and Saturday and 11 a.m. to 7 p.m. Sunday. The space is available for private events on Mondays and Tuesdays.