Shawnee city staff and residents last week celebrated the grand opening of the city’s fourth fire station — a testament to the city’s growth west of I-435.

“This new station — starting this morning at 7 o’clock — will provide an improvement in response time to nearly 6,000 homes and 17,000 residents,” said Fire Chief John Mattox at the grand opening ceremony Thursday afternoon. “So, from the men and women of the Shawnee Fire Department, a heartfelt thank you to the community and to our governing body for your support.” 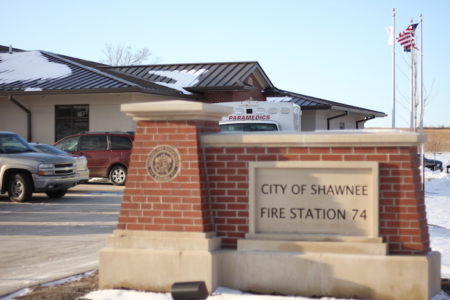 In lieu of a ribbon cutting, Shawnee firefighters, city leaders and project team members conducted a “hose uncoupling.” Mattox said they are carrying on the 150-year-old tradition that occurs when firefighters open a new fire station.

Council president Stephanie Meyer, who lives in Ward 3 where Fire Station 74 is located, said the new fire station’s location is a reflection of the city’s growth west of I-435.

“This building shows our continued commitment to invest in the safety of our community,” Meyer said. “It is an example of how the governing body works with city staff to make sure that we are making our home as safe as possible.”

Discussions of building a new fire station on the western end of the city began in 1998, the fire chief added. He also thanked city leaders for agreeing to build the city’s fourth fire station.

Mattox thanked the project team, WSKF Architects and McCownGordon Construction, for designing and building the new fire station. The chief also thanked the building committee for their efforts.

“All of the people put a ton of work in this beautiful building that will serve our community for many years to come,” Mattox said.

As part of the ceremony, the Shawnee Boy Scout Troop #358 also raised the American, Kansan and city flags over the new fire station for the first time.