Each legislative session, we provide the Shawnee Mission area’s elected officials with the chance to share their thoughts about what’s happening in the state capitol. Rep. Jerry Stogsdill, Rep. Susan Ruiz and Sen. Mary Pilcher-Cook are scheduled to send updates this week. Here’s Sen. Pilcher-Cook’s filing:

On Wednesday, Governor Laura Kelly gave her state-of-the-state address. Thursday, the governor provided an overview of her proposed budget to the Legislature. While the governor says she is opposed to raising taxes, her budget includes more spending for public education (over $500 million between FY 2020 and FY 2023), more spending for social workers, and more spending for Medicaid expansion, raising overall spending by 7.2 percent and making an increase in taxes necessary for Kansas to have a balanced budget required by law.

Absent from any of the governor’s proposals was an effort to decrease the financial burden on Kansas taxpayers. During the campaign, the governor favored lowering the sales tax on food, which is among the highest in the nation, but it was not in her budget. The governor also failed to mention the tax increase that will be applied to Kansas taxpayers if the Legislature does not take action on the government windfall from the Trump tax cuts.

Because the state tax code is coupled with the federal tax code in some areas, the Trump tax cuts will cause Kansas citizens to inadvertently pay more in state taxes – unless the Legislature acts to decouple the code. In other words, not doing anything is a tax increase. While the governor said she is against tax increases, she voted against this decoupling last year. Kansas taxpayers should receive the ability to get the full benefits of the Trump tax cuts.

Instead of taking on the governor’s stance of continually spending more than projected revenues, the Legislature should focus its efforts on stopping tax increases, paying off debts, shoring up public safety, protecting life and liberty, increasing accountability and transparency, improving student education outcomes, and lowering health care costs for Kansans.

KPERS Re-Amortization: A Bad Idea Then, a Bad Idea Now

Concerning the governor’s proposal for the government’s retirement system, KPERS, I will quote what Kelly said as a senator in 2017, when Governor Brownback made a similar proposal: “The governor’s plan would unravel all the work done to ensure financial stability of KPERS.” (Wichita Eagle, January 12, 2017.)

I was against Brownback’s KPERS plan then, and I am against Kelly’s plan now. KPERS is a debt obligation, and re-amortizing it extends the time the state will take to pay off all future retirement costs. This kicking-the-can-down-the-road strategy will significantly increase costs (estimated $7.4 billion), making the plan even more unstable. The KPERS board voted unanimously against the Kelly plan.

I was pleased to see the KPERS Board reject the idea in a strong vote when they met on Friday this week. In contrast to the Kelly plan, I signed onto legislation, SB 9, which would make up for the payment missed in FY 2018. Below are the details of that bill, which you can have access to by clicking here.

To be good fiscal stewards, this is a debt we owe and a debt we should pay on time, absent extraordinary circumstances.

You may be frustrated that there is continued talk about Medicaid expansion. It will likely have its strongest possible push this session, given that the governor put it on the top of her agenda. Despite the optimistic talking points proponents like to use, the reality is that expanding this ObamaCare program would be a very bad move for Kansas, both for the moral consequences that would result, as well as the substantial fiscal damage it would inflict on our state.

During my time in Topeka, I have often stated that a public safety net is necessary for those truly in need. However, Obamacare shifts the emphasis off those most in need to covering able-bodied adults that can work. Medicaid was originally intended to serve (note the link) the poorest of the poor and those with disabilities, which is what a true safety net should do.

There are thousands of Kansans with disabilities on the waiting list for Medicaid services. Our priority should be to those Kansans who are most vulnerable. When you combine this moral component with the fiscal reality that the matching federal funds will be decreased in 2020, there is even more reason to actively oppose expanding Medicaid.

Not only will Medicaid expansion redirect resources away from those truly in need, it will also direct funds away from education, public safety and infrastructure. I will add more about this in future newsletters as there are many facets to this issue.

The right to live according to your beliefs is at the core of the reason our country was founded; a self-evident truth in our Declaration of Independence that liberty was given to us by our Creator. Yet today, we face an unprecedented attack on those freedoms, both from government and from the media. Recently, we have seen attacks against members of the Knights of Columbus and attacks against Karen Pence, the wife of Vice President Mike Pence, because she teaches at a Christian school.

The attacks are not just verbal. Those making the attacks are also trying to enshrine their beliefs in law with so-called non-discrimination “sexual orientation” and “gender identity” clauses, both in cities and in states. I believe all people should be treated with respect and that there should be no unjust discrimination, but adding these clauses change our laws from being objective and applied fairly to all, to being subjective and opinion-oriented. This can have serious and unintended consequences to innocent citizens. We have a state law that has protected us for years without the need to add these clauses.

This past week, the governor issued an Executive Order, which gave LGBT state employees and employees of state contractors the subjective protected class status. And, by including contractors, there is much suspicion that the governor will be using it to circumvent the law passed last year that protected faith-based adoption organizations across Kansas from getting sued when they placed a child with a mother and a father.

This is not unexpected, as the governor had indicated she would attempt to evade the Adoption Protection Act. As the Family Policy Alliance Director of Kansas asked, “Is there evidence your own administration is engaging in discriminatory activity, or is this an executive order in search of a problem?”

In response to a reporter’s question this week, I said the following:

“This executive order is anti-liberty, not anti-discrimination. The human person cannot adequately be described by his or her sexual inclinations. It is degrading to reduce individuals to such traits. Sexual orientation and gender identity cannot be determined simply by looking at a person. These laws cause divisions in communities and can have serious detrimental and unintended consequences because of their subjective nature. What exactly does discrimination based on “sexual orientation” and “gender identity” mean? What conduct can or cannot be penalized?”

On Friday, the March for Life was held in Washington, D.C., drawing hundreds of thousands of people with the theme “Unique From Day One: Pro-Life is Pro-Science.” As the March for Life website indicates, “being pro-life is not in opposition to science. It’s quite the opposite in fact! Medical and technological advancements continue to reaffirm the science behind the pro-life cause – that life begins at fertilization, or day one, when egg meets sperm and a new, unique, human embryo is created.”

Do we decide whether an entity is a human being by a subjective decision, that is, by a personal opinion, or is it discovered through objective scientific means? When human life begins can scientifically be discovered and determined. In contrast, determining when human life has intrinsic value and deserves protection in our laws is the actual debate we are having in our society today, although it is often confused with terminology and mistaken subjective opinions about when life begins.

This coming Tuesday, a March for Life will also be held in Topeka. You can learn more about that event by clicking here.

With the pomp and circumstance of the first week behind us, the second week will involve diving more into our committee work when we return on Tuesday. The clock is already advancing, as we have just five weeks until Turnaround. 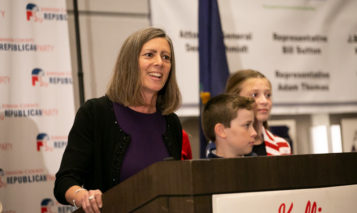