When the Shawnee Mission School District posted the opening for a new superintendent early last year, one of the issues highlighted in the job description was the need for a candidate who “possesses the leadership skill required to respond to the challenges presented by a culturally and ethnically diverse community.”

That line was among the primary motivators for Dr. Mike Fulton, who at that point had been superintendent of the Pattonville School District in suburban St. Louis for 11 years, to apply. And six months after stepping into the role in Shawnee Mission, he says he’s found a community that’s ready to take a hard look at academic disparities and work to close them.

In his first year on the job, Fulton has made a priority of getting out to district schools for in-person visits, meeting principals, teachers and students. He’s also packed his calendar with meetings with elected city officials, state legislators and local business leaders. It’s been a rigorous acclimation process moving from Pattonville, which serves about 5,600 students, to Shawnee Mission, which is roughly five times larger — but it’s gone smoother than he expected, he said.

“The biggest challenge in a large system is that it takes longer to build relationships, whether with adults or with kids,” he said. “When you come from a system where you’ve been there a long time and you know lots of people to a place where you are literally starting over, it just takes time to get relationships built. But in terms of the work that’s to be done, it’s very similar.”

‘Don’t see anybody who is scared’ of addressing academic disparities 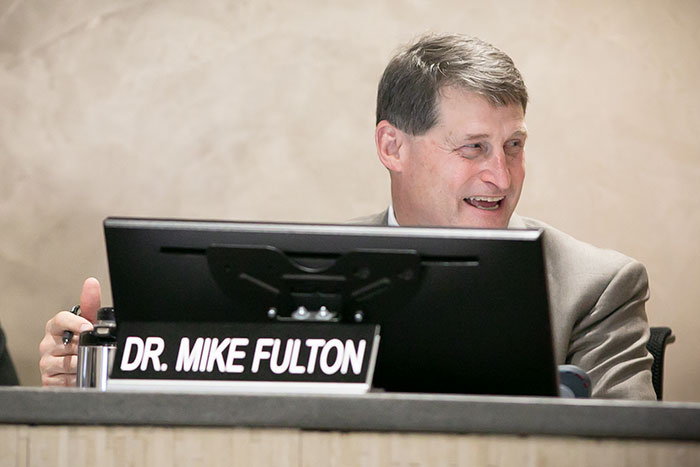 Among the characteristics that stood out strongest as he’s gotten to know the community is Shawnee Mission’s pride in its public schools and their history of excellence. In fact, he says, he’s never encountered a community that cares as much for its K-12 system.

“One of the things that’s really impressed me about Shawnee Mission is that there’s a deep sense of community, and that also applies to Johnson County,” he said. “I don’t know that I’ve ever seen a county that loves its schools as much as Johnson County does.”

He also lauded the collaboration among leaders — from local governments, state government, school districts and business groups — on working together to “make sure Johnson County remains vibrant not only today, but that it gets better into the future.”

To that end, Fulton said, he’s been impressed with Johnson Countians’ general willingness to address challenging issues that are on the horizon. The growing racial and socioeconomic diversity of the Shawnee Mission area has brought to the fore locally the achievement gaps issues that are prevalent at the national level.

Fulton says both the administration and patrons appear to have welcomed scrutiny of data showing disparities in achievement among student groups in Shawnee Mission.

“It’s…important to put that data out into the public in a way that’s honest, which we’ve done,” Fulton said. “We’ve acknowledged the fact that we have disparity in our academic achievement data, for example, whether those are students of color or students who are on free-and-reduced lunch. You have to be able to put that data out there honestly, but also say this is where we’re starting, let’s build a plan of where we want to go, and let’s work together to get to the outcome we desire for our kids.”

As the district gets ready to embark on a substantial strategic planning process that will inform its focus areas and approach for the coming years, Fulton said Shawnee Mission has been more than willing to acknowledge where it needs improvement.

“I don’t see anybody who is scared of it, either,” he said. “And that’s made me really proud of the community. I mean, the data is the data. What we choose to do about it is what matters now.”

Tomorrow we’ll take a look at Fulton’s thoughts on the state of the district’s 1:1 technology initiative, efforts to provide support for students’ mental health and allocating resources to the classroom.