As Shawnee staff and city leaders move forward with plans to put a vote on a property tax increase to fund a potential community center before city residents later this year, designers this week are getting public input on concepts for the proposed project.

City staff led an open house last night to share initial design concepts based on feedback from residents over the past year. City leaders and staff as well as designers from Perkins+Will, architects at Clark Enersen Partners and staff from JE Dunn Construction were on hand Tuesday for the open house at Shawnee Mission Northwest.

The council Feb. on 11 will consider a mail-in ballot question in the spring that would ask Shawnee voters if they would approve a mill levy increase to fund the new community center, which would be located on 26 acres east of West 61st Street and Woodland Drive.

The open house had a steady stream of residents last night who saw preliminary concepts of floor plans and artistic renderings of the exterior and interior spaces for the community center.

Last year, city staff collected feedback from residents through surveys, public meetings and also a “build-a-center” workshop to see what they would like to see in a community center. That feedback, combined with the makings of a master plan for operations, inspired the design concepts being showcased for residents this week, said Tonya Lecuru, deputy parks and recreation director.

“We did this a little bit different than I think some cities normally do this where we’re trying to gather a lot of this information prior to the election so we can make sure that when we give somebody a cost, it’s going to cost X amount of dollars to build this facility and operate it; there’s guarantee in there,” Lecuru said. “We want to make sure that whatever we provide to the residents, it’s something that’s feasible for everyone.”

In a recent survey, two out of three residents gave strong support for a community center, according to Shawnee city records. Residents shared both pros and cons on the project, Lecuru said, adding that some residents travel to community centers in neighboring cities such as Olathe and Lenexa. These residents hope to have pickleball and an indoor aquatics facility open year-round.

Some residents have shared concerns that they don’t want to pay for a community center with their property taxes if they’re not going to actually use it. 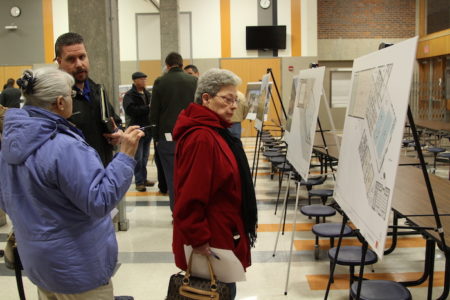 “That’s why we want all the information — pros and cons — if there’s somebody that we can give more information to or they don’t understand, or things that maybe we didn’t consider of think of that we need to make sure we hear,” Lecuru said.

Perkins+Will has been charged with designing a community center within the scope of a $34.7 million budget. However, Lecuru said that by the Feb. 11 meeting, city staff will have a firm cost for construction and maintenance of the community center.

A second open house for the community center will take place today from 5:30 to 7:30 p.m. at Monticello Trails Middle School at 6100 Monticello Road.

“We’re here to educate the residents of what the possibilities are, how it will impact them and their families, and then they can make the choice based on what’s best for them,” Lecuru said.