The wet, heavy snow that’s lingering from Winter Storm Gia is complicating efforts to restore power for thousands of homes growing increasingly cold since they went dark over the weekend.

KCP&L says it has more than 1,000 workers in the field reconnecting power. But as of 6:30 a.m., the utility reported there were still more than 3,800 outages affecting more than 47,000 customers in its queue. As of Sunday night, KCP&L was predicting it would take until at least Tuesday for all homes to have power restored.

The power outages will leave families with students at John Diemer and Brookridge Elementaries in Shawnee Mission looking for something to do with their kids today. The district was forced to cancel classes at both schools on account of power still being out there as of last Sunday night. Power outages had threatened to cancel classes at Belinder Elementary and Indian Woods Middle School, as well, but the district’s operations and management team was able to quickly ready the schools for students after power was restored late Sunday.

At Tomahawk Elementary, however, power went out at 5:30 a.m. Monday, forcing a last-minute cancelation of classes.

“At the moment, none of the closings will impact the calendar for those buildings,” Smith wrote. “We have enough minutes, assuming that we don’t have any additional closings days.”

During extended winter power outages, Johnson County Public Library branches serve as warming centers. Fairway, which still has hundreds of homes without power, announced this morning that it was opening city hall as a warming center today, as well.

“With hundreds of Fairway residents still without power, Fairway City Hall will open at 9:00 a.m. on Monday, January 14th as a warming center and charging station,” said the city. “Bring your portable electronics to charge up and stay awhile. The multipurpose room will be set up with tables and chairs and will be available for use until the conclusion of the City Council meeting Monday evening.”

Big clean up ahead

Power outages aren’t the only headaches Shawnee Mission residents are dealing with in the wake of the storm.

As the wet snow piled up, it added thousands of pounds of pressure to trees, causing hundreds of limbs snap. Some residents even saw entire trees tipping over, like this one on Linden Drive in Prairie Village. Photo courtesy Greg Peters: 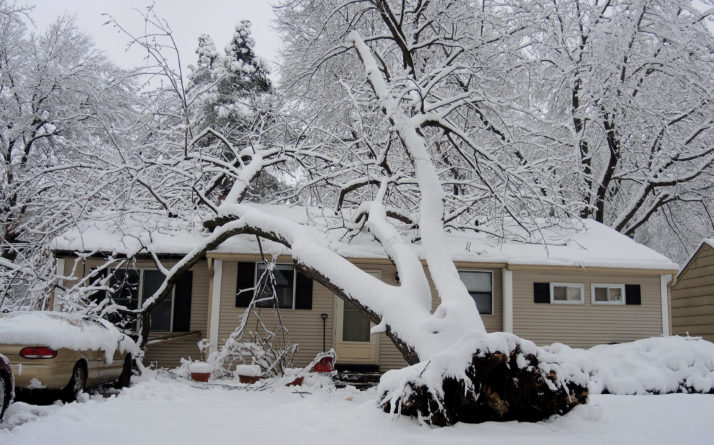 Fairway announced this morning that it would be planning a special storm debris/brush collection, and that it would release a collection schedule soon. And Prairie Village City Administrator Wes Jordan said that city will offer a curbside collection for limbs as well.

“We are very early into this storm, but we have determined we will be doing curbside collection of limbs – we are still in the planning stages and coordinating with our contractor,” Jordan said. “It will likely be several days before this is started to allow residents time to get debris to the curb.”