The first major change in Lenexa’s old downtown in 30 years began to take shape this week, as the Lenexa City Council got a peek at a project that would significantly alter the block now occupied by the old community center, senior center and a small adjacent park.

An architect walked the council through the first draft of plans to eventually tear down the Senior Center at the corner of Pflumm Road and Walnut Street and bring it under the roof of the community center next door. The drawings also reconfigured the parking lot and created an outdoor gathering space for activities like pickleball or bocce ball in the area where the Senior Center now is.

A rendering by Confluence, the city’s consultant on the project, showing the proposed reconfiguration of the current site is below: 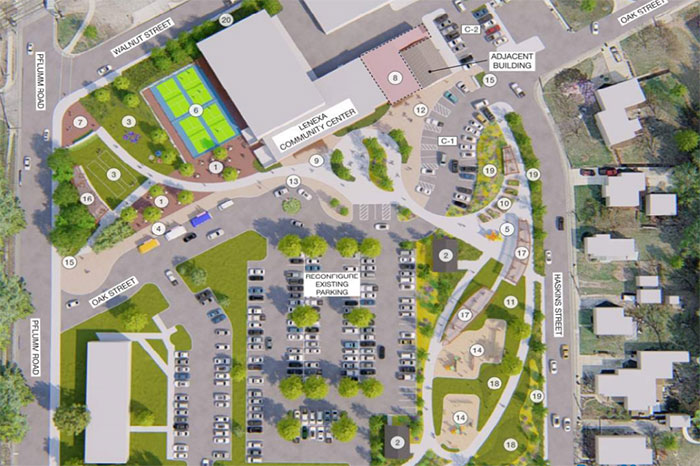 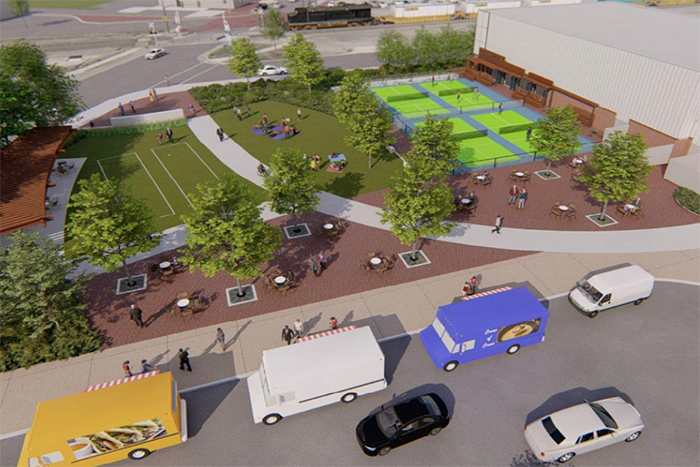 …and looking north toward the Community Center building: 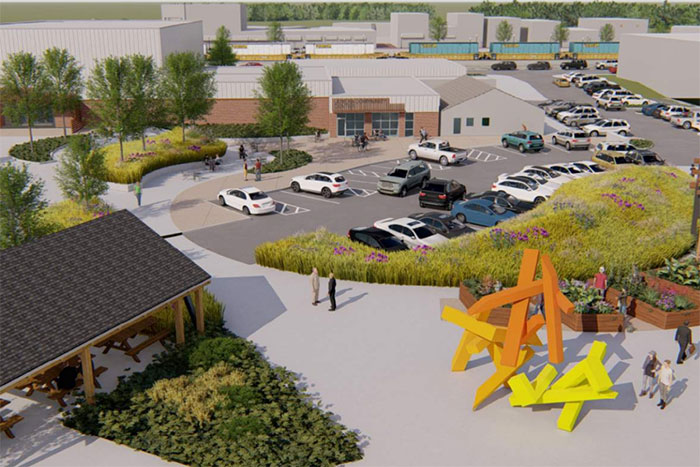 The plan is still in a very preliminary stage, only on the city’s “wish list” and not the more concrete capital improvements budget. Still, the presentation by Brian Garvey of SFS Architecture is the first look at how some of the suggestions from the 2015 planning study of the neighborhood might actually look. And it got very favorable reception by some on the council.

“This is exciting to me,” said Councilmember Corey Hunt. “It’s a good feeling to look at this and think about how it may activate all of downtown.”

The two buildings in question are in need of some changes to make them more efficient and improve accessibility, said Danielle Dulin, assistant to the city administrator. The senior center was built in the mid 1970s as an auto shop, then became a flower shop and served as City Hall until 1981.

The community center was built in 1982 and added on to in 1989. It has a gymnasium, offices and some smaller activity rooms. Although the city opened a new rec center just over a year ago in the new City Center development, the original community center was envisioned as a complimentary facility. It will be continued to be used for some gym activities and leagues plus city and private events.

Dulin said programming for the growing senior population is limited by the space and staffing constrictions. Updating their accessibility alone would cost about $115,000. But combining the two under one roof would make the space and staffing more efficient and would create an open green space downtown, which was one of the priorities from the visioning study. It would also improve seating capacity for the senior center to 120 seats.

The plan calls for the Senior Center to move into space on the east side of the community center. Parking would be added in front of that end of the building from the corner of Oak Street and Haskins Street. Scouting Park, on the southeast corner of that block, would also undergo major changes according to the proposal.

The proposal breaks down the project into three phases, with the community center improvements first, combination with the Senior Center second and the surrounding block last. According to rough estimates, the entire project, if done all at once, would cost around $5.2 million.

Council members were generally enthused about the idea. “I’ve been waiting in anticipation for this,” said Councilmember Mandy Stuke, who represents the Old Town area. “I’m just super impressed and really pleased to see what you’ve brought.”

There were questions, however. Mayor Mike Boehm was concerned that the new proposal doesn’t include enough parking close to the entrance where the Senior Center would be.

More space would also be freed up if MedAct vacates the adjacent city-owned building to the east, Boehm said. The city is already in discussions about finding a new home for the ambulance service, said City Administrator Eric Wade.

The plan is the most recent evidence of action in the older part of Lenexa. The city also is working on another top priority of the visioning session. Quieter wayside horns at the train tracks are in the works for installation this summer.