The SM East seniors partnered with Rise Against Hunger, a hunger relief organization fighting global hunger, for their final project as a class. The nonprofit provided the seniors with all of the food and materials for the project Monday morning.

The seniors then split into groups and took on different tasks. Some bagged meals of dried soy products, vegetables and rice, while others weighed each meal. Some groups packaged the meals and others labeled each package to be sent somewhere around the world.

“I think it’s a really cool opportunity that we’re able to do this at our school and give back to people who don’t have as much as we do,” said Alana Rowan while she poured rice and veggies into small baggies. “We’re obviously a lot more privileged than most of the world, so I think it’s nice that our whole grade got together to do something great.”

Aaron Berlau said Monday morning’s project and the seniors’ service project last semester were great send-offs for them as they finish their last year of high school.

“I thought it was a good way to ease us back into school after a long break,” Berlau said, adding that he thinks the results will ultimately help to ease global hunger pains. “This is a fairly privileged school, so a lot of us have a lot of things already, so I think it’s good that we’re trying to give back to people.” 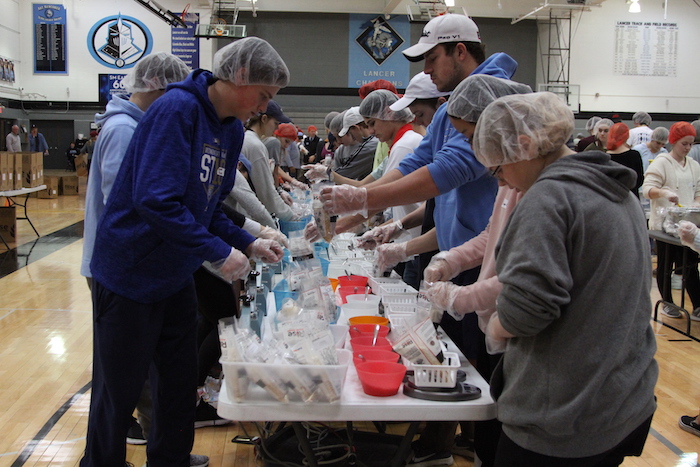 Britton Haney, associate principal at Shawnee Mission East, said the seniors worked to reach their goal of 18,000 meals. They banged a gong to celebrate as they completed packaging each set of a thousand meals.

“The gong just went, so that means we hit our first thousand meals,” Haney said. Less than three minutes later, the gong rang out again.

Haney said the seniors could have opted for other end-of-high-school activities, such as bringing a guest speaker or participating in a seminar. The seniors wanted to do this service project, so they raised the $6,000 to cover costs for the 18,000 meals and packaging materials.

“We were told that it was going to be a great opportunity to get involved with the students,” Battes said, adding that about 300 students — or three-quarters of the SM East Class of 2019 — came out to help.

Battes said Monday’s project was the first time Rise Against Hunger has worked with SM East. The hunger relief organization has also worked with SM West the past five years, packaging food in conjunction with the Lenexa and Western Johnson County Rotary clubs.