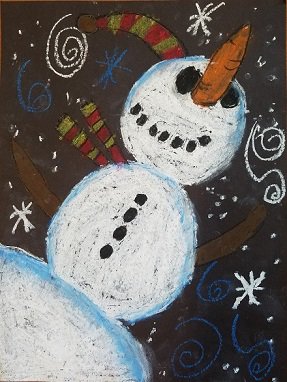 Shawnee Mission student wins KU school’s art contest. East Antioch Elementary student Lola Stowe won the University of Kansas School of Education’s holiday artwork competition. The school used her picture of a snowman, shown here, in a greeting that was sent to more than 20,000 people.  Stowe gets a certificate noting her accomplishment, and the work will be put on display at KU.

Lenexa moving forward with Complete Streets input. Lenexa is taking the next step in its Complete Streets study by sharing a survey to gather public input over the next few weeks. The city kicked off the Complete Streets program with an open house in October to focus on connectivity and infrastructure for all modes of transportation. The survey, which will be sent out to a random sample of Lenexa residents, will “further hone what and where future infrastructure improvements for drivers, pedestrians, bicyclists and transit users are needed throughout the city.” Survey results will be used to craft a policy, which will be unveiled this spring.