Somehow, a police officer’s knock on the door sounds different. A few fast raps and then that authoritative voice calling out one word: “Police.”

When Shawnee resident Trena Smith opened the front door to her apartment in Arbor Square, she didn’t even notice that the uniformed officer was wearing a ridiculously out-of-character blue Santa hat. All she thought was, “Lord, I know I didn’t do anything. What on earth could this be about?”

She had no way of knowing that Shawnee police officer Roman Madrigal knew all about her story — how she had just lost her job right when she was trying to move out of public housing, how she is trying to continue her education and return to career in home health care, how she just needs to make ends meet so her family could have a great Christmas this year.

So when Officer Madrigal handed her a $100 bill, Smith accepted it tearfully.

“This is a blessing because, like I said, me losing my job,” Smith said. “Now I can go back out and get her (my granddaughter) something else she wants for Christmas.” 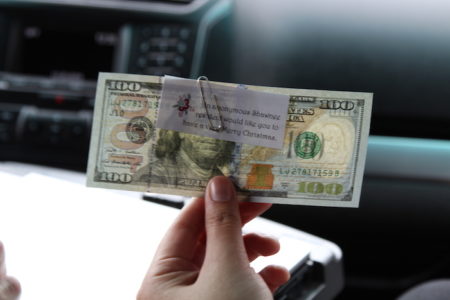 Madrigal and a handful of Shawnee patrol officers have been driving around town in search of people who could use the extra cash this time of year. All in all, the officers have given away $10,000.

Every dollar each year comes from a nameless Secret Santa who asks the Shawnee police to pass out the cash to those who need it. And so, each year for the past four years, the police officers spend a few weeks on the lookout for opportunities to give the cash away.

Only the chief of police knows the Secret Santa’s identity. Some of the officers have met him, but they don’t even know his name.

“And if you think about when this started happening, about four years ago, when police were really taking a hit from some of the things that were going on — Ferguson and Baltimore and all these different places — he wanted to help us get a good image out there of ourselves,” Madrigal said. “So the idea of giving out random cash money to people with no strings attached, there’s virtually nothing negative about it. Just to bolster our image in the community, and I think it certainly has done that.”

Smith’s story is just one of dozens the Shawnee police officers heard this holiday season. A Vietnam War veteran just had surgery for his bad leg and is trying to care for his little girl. A young woman is spiraling down a path of bad choices. A man still suffers from a traumatic brain injury he incurred in a car accident when he was a child. An older woman lost all of her Christmas presents when somebody stole her car with all of the gifts inside. A mother is struggling to make ends meet for her ailing son in a wheelchair.

“Now, you can see where this is a little bit of a dilemma,” Madrigal said. “I’m not trying to play God or anything like that. But Lord knows, you have to make a decision about which one.”

Madrigal, who works for the community engagement and outreach division of the Shawnee Police Department, hears these stories year-round. But there just never seems to be enough cash to go around.

“It certainly fits our mission of making sure that people realize that police officers are just regular people,” Madrigal said. “I get very emotional sometimes with these. When a person starts crying, how do you not start crying with them?

“But really, I’m just the messenger. I always want to emphasize that it’s (from) the Secret Santa.”