Christa McAuliffe Elementary School was named a national winner for doubling its composting efforts by the Environmental Protection Agency. The federal agency recognized the elementary school Friday as the only school nationwide to be a data-driven winner this year in food recovery.

The Shawnee Mission School District also received regional recognition in EPA’s region 7 for its food recovery efforts. The agency awarded the district and elementary school in a ceremony Friday afternoon.

Michael Orr, principal of Christa McAuliffe Elementary, said it was exciting to find out the school and district were “outside of the norm” in its composting efforts.

“Usually, you don’t think about winning an award for things you do every day,” Orr said, “but what we found out is there aren’t that many schools that participate in this kind of program at the level that we’re participating. So the things that we are just doing every day are things that are shaping opportunities for kids later on that not everybody’s doing.”

Missouri Organics picks up the leftover food from each of the schools, hauls it off site, composted and then brought back to the schools to be used in gardens and landscaping.

Joan Leavens, coordinator of sustainability and community engagement for the Shawnee Mission School District, said the national kudos for Christa McAuliffe Elementary and the regional kudos for the district speak to a growing community of support on the local, regional and national levels for sustainable lifestyles.

“It confirms that we are doing our part and that it has value,” Leavens said.

Penny Harrell, a physical scientist with the Midwest region of the Environmental Protection Agency, said food in landfills produces methane — a potent greenhouse gas; composting, on the other hand, returns nutrients to the soil as a soil additive when under the right conditions.

The federal Environmental Protection Agency estimated that food is the largest component of material solid waste that ends up in a landfill – about 22 percent in 2015.

Chuck Weismiller, a former custodian at the school who helped facilitate the start of the compost at Christa McAuliffe in academic year 2015-16, said he’s proud of the students for continuing the program after he left.

“Now, they’ve got it to where they’re running it by themselves, which was my eventual goal,” he said. “I’m super proud of these kids; I was really concerned that the program wouldn’t continue without my input. To see that it did is just so, so heartwarming.”

Weismiller said he was also proud of Christa McAuliffe Elementary fifth-grader Madison Boyle and her dedication to the compost efforts.

Boyle, who gave a speech at the ceremony, was one of Weismiller’s first volunteers and kept the compost going with her fellow classmates. She said composting is important “because it saves our environment; it helps the trashmen so it’s less work for them, so they can get it done faster as well.”

Weismiller, who considers himself to be an environmentalist, said composting is important, but the lessons students take away from it is even greater.

“I’m thinking about the fact that these kids now understand why it’s so important to do this kind of stuff,” Weismiller said. “And to find out that we were the best in the nation? That floored me.” 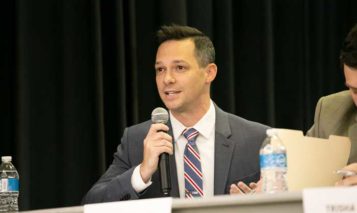