When all the votes were tallied from November’s election, Democrat Laura Kelly had taken every one of the more than 125 precincts inside the I-435 loop in Johnson County, one of the most densely populated areas of the state.

Kelly’s dominance in that Shawnee Mission area footprint proved key to her win in the race to become Kansas’s next governor. Her statewide margin over Republican Kris Kobach was 45,991 votes. Her margin in Johnson County alone was 43,153.

Second that for Democrat Sharice Davids. Though Davids didn’t match Kelly’s clean sweep, she significantly outperformed Republican Kevin Yoder in the inside-the-loop precincts, putting her on track for a nearly 10-point defeat of the four-term incumbent.

Using data from the elections, Miller generated maps illustrating the results from the gubernatorial and Kansas 3rd Congressional District races, each showing that the Democratic candidates locked down the precincts inside the I-435 loop while Republicans controlled most of the territory outside the loop. 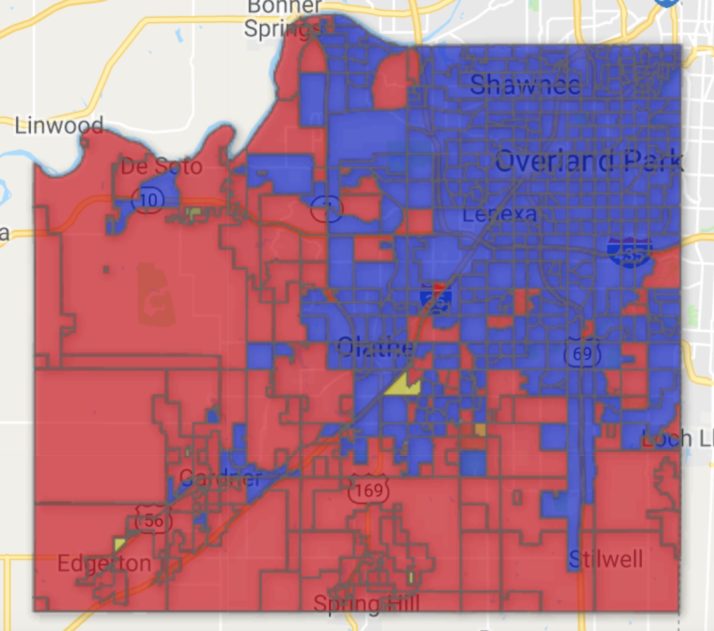 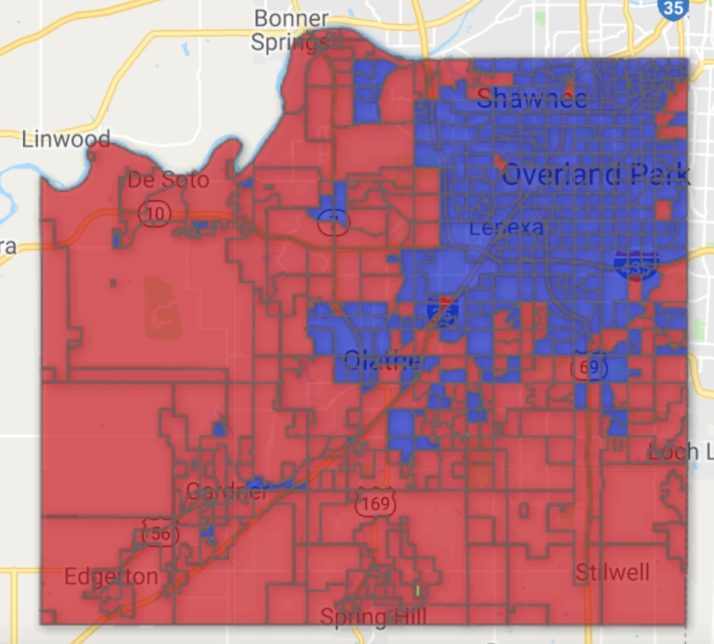 Miller said the inner suburb-outer suburb divide is fairly typical of voting trends across the country.

“Within suburban communities, those closer to urban cores are trending Democratic at higher rates, though even exurban communities further out are also generally improving for Democrats across the country,” Miller said. “In Johnson County, we see this with precincts and districts inside of 435 swinging the hardest to Democrats over the last decade. As you work outward from the 435 loop, voters are often still voting more Democratic than they were a decade ago, but at lower rates the further from the 435 loop that you get.”

He also noted that the outer-county precincts that went for Democratic candidates look to be clustered around the I-35 and US 69 highway corridors.

“This is probably because the housing around these roads is higher density and skews more rental, which likely attracts younger populations, and persons who are lower income or minority,” he said.

Education is biggest factor in split between white voters

Johnson County’s predominantly white and well-educated population makes it a predictable location for a trend toward Democratic candidates, Miller said.

An increasingly diverse population in the county could be playing a part in the trend as well, Miller said, though Johnson County has not seen racial diversity increasing as quickly as many other suburban communities in the country.

“Some suburban counties are diversifying racially. We see less of that in Johnson County than some of its similar counterparts elsewhere, but that could still play a small role here,” he said. “And of course within suburban communities, your areas closer to urban cores tend to attract younger residents who are often more Democratic than older persons, which helps skew your inside 435 precincts more Democratic than the exurban parts of the county.”

Miller has more analysis of the November results and context about how the county has shifted since 2000 on his Twitter account.