The Johnson County Commission is considering an end-of-the-year budget item that will give Sheriff Calvin Hayden a 6.5 percent pay increase and bump up the salaries of sheriff’s employees to bring them closer to what the job market is paying.

Hayden’s proposed pay increase would make him one of the highest paid county sheriffs in Kansas, with an annual salary of $163,553.

The measure, which will be voted on Thursday, also adds $750,000 to the amount the department can spend for unexpected expenses and overtime due to an increasing jail population.

The immediate impact on the county budget is small, though it may add to personnel costs in the long run. The jail contingency fund, which increased from the usual $1.5 million, would only be spent if the expenses warrant it, and the salaries will be phased into changes in the sheriff’s civil service pay scale. Hayden’s pay raise would cost an additional $10,000, but would be done within the office’s existing 2019 budget, according to county records.

The salary items are part of an ongoing effort by the county human resources department to bring pay in Johnson County closer to what it would be elsewhere, Hayden said.

For instance, new sheriff’s office hires have for years started at the bottom of the pay scale, regardless of past experience, he said. But that made it more difficult for the county to compete for employees.

Changing that practice means the county can now hire more experienced people and it saves the cost of sending them to the training academy, he said.

But once the county started doing that, the experienced people already on the payroll became underpaid, he said. Adjusting the scale would affect around 40 deputies hired with 10 years of experience who started at the bottom of the scale.

Changes also need to be made for employees in the crime lab, he said. In the past, police officers got their lab training on the job. But now forensics is more technical and new hires are more like scientists than cops, Hayden said. The county is upgrading its autopsy capability with a new lab and a new medical examiner appointment scheduled for this month.

Hayden’s salary increase was suggested by county human resources and bringing his pay closer to area police chiefs’ with similar-sized staffs is “the only reason I’m entertaining it,” he said. The Kansasopengov.org database had records for 2017 showing Hayden at the top of county sheriffs in Kansas, ahead of Douglas, Sedgwick and Wyandotte counties.

Hayden said a better comparison is to cities like Overland Park, Shawnee and Olathe, which have bigger staffs. “We’ve got 635 employees. We’re the largest law enforcement entity in the state of Kansas,” he said. Other Kansas counties are smaller, and the Wyandotte Unified Government combines sheriff and police departments so it isn’t a direct comparison, he said.

Some local police departments pay their chiefs a higher salary, he said. The Olathe police chief has an annual salary of $173,000. Overland Park Police Chief Frank Donchez’s salary is $166,412. Shawnee’s chief gets $154,000, more than the sheriff is presently paid. 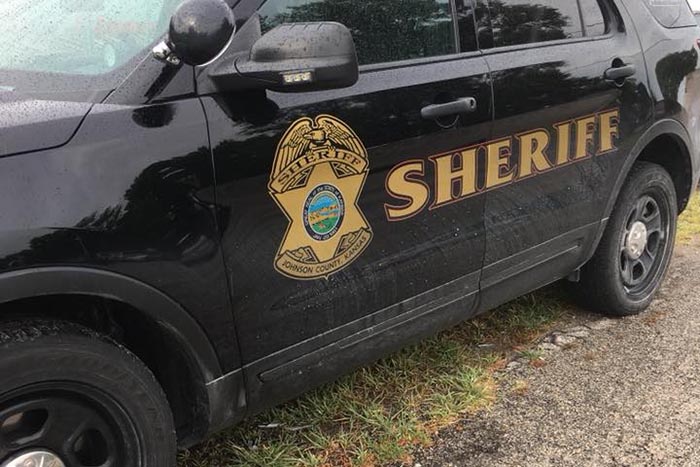 For years the jail population has been on the decline, partly due to house arrest, changes in sentencing and programs that work with veterans and the mentally ill. But last year the number of inmates increased by 6 percent, Hayden said.

Hayden theorized that law breakers may be on the move from elsewhere in the metro. “If you look at Kansas City Missouri and Kansas City, Kansas their violent crime rate is going down. Well, it’s moving to the suburbs,” he said.

The county also has seen a big increase in the number of incarcerated women, which Hayden said he cannot explain. There are about 160 women in lock-up right now at the jails in Olathe and Gardner, he said.

As a result, the department sometimes needs staff to open new jail modules for the increased population. And that often means overtime, as any new hires must go to academy training.

Jail population has been at just over 818, with a total jail capacity of 1,000 beds, he said. Right now the department has just enough staff for those 818 inmates.

Overtime at the sheriff’s office has long been a sore spot with the county commission. It was a big sticking point in their past dust ups with former Sheriff Frank Denning, who asked for end-of-the-year contingency spending for overtime because the department was short staffed.

Denning eventually got a bigger payroll, but hiring was slow because of training and difficulty finding recruits.

That’s no longer the case because of a streamlined hiring process, Hayden said. Applicants still get the tests – polygraph, physical agility, criminal background, etc. – but the tests are not strung out over a six-month period any more. The department also has whittled down the former 40-page job application to 10 or 12 and has gotten more help from county human resources to do the hiring, he said.

Hayden said the department is now at full staff with 650 deputies and civilians. More than 180 were hired in the past year, he said.