Every year around Christmas time, Santa Claus pays hundreds of visits to children all over the country.

And while many kids just want to see Santa to deliver their wish lists, some are looking for a friendly face as well. Unfortunately, for kids who are sick or who may be sad because they’re losing or have lost a loved one, the Christmas season can be an especially difficult time. What to say to kids who are coping with those kinds of traumas can be a difficult question — even for Santa Claus.

That’s where Santa America, a volunteer service organization operated by John and Helen Scheuch in Prairie Village, comes in.

“We help train and support Santa to be able to make those very difficult visits,” Scheuch said.

John Scheuch has been president of Santa America since he and Helen Scheuch took over the organization in 2016 (Helen is “chief administrative elf”). But they’ve been involved since almost the beginning when Santa America was established by Ernest Berger in 2003 in Daphne, Alabama.

Mind you, this is John Scheuch’s 44th year helping train Santa to be able to visit all children. And it’s a family tradition: Scheuch’s father, grandfather, uncle and stepfather have all been involved in Santa’s visits over the years.

The Scheuchs first started coaching Santa America volunteers on how to visit children on hospice care back in 2006. John said that, at first, many of Santa’s helpers admitted they were afraid they wouldn’t know what to say to these children going through a life-changing, difficult time.

So, the Scheuchs teach Santa what to say, what not to say, and how to handle emotions. Scheuch’s volunteers help Santa learn everything about a child’s situation before the visit. They also help Santa listen to doctors and family members so he knows how he can bring the most joy to a child during a visit.

Scheuch also prepares volunteers to help Santa talk to children about his prime topic — What do you want for Christmas? — and some of the toughest answers a child can ever give, like bringing a lost parent back or returning a child’s health.

In fact, Scheuch often has to remind Santa to tell children that he’s only a magical toymaker and deliverer who wants to bring children love and hope and joy — which is Santa America’s motto.

Volunteering for Santa America is ‘not for everybody’ 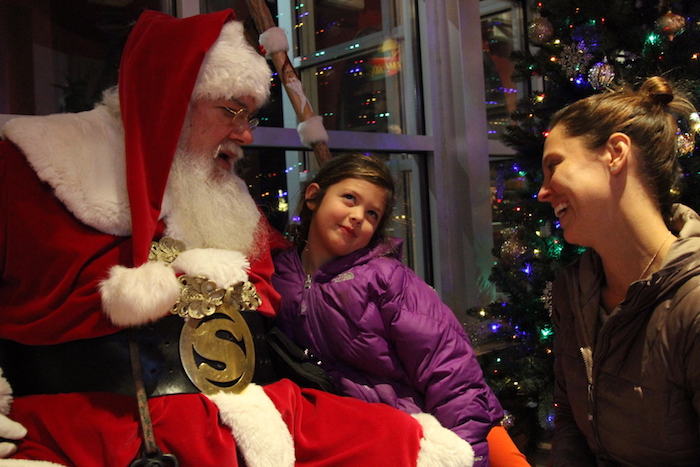 Volunteering for Santa America is “not for everybody,” Scheuch said. Sometimes it’s hard for him, even though he’s been at it for more than a decade. One of his hardest visits was with families coping with PTSD at Fort Riley, which took place at the time of the Sandy Hook shooting in 2012 in Newtown, Connecticut.

But Scheuch has dozens of stories where he’s seen Santa touch the lives of children — and, in return, how these children have changed his life.

“Every child deserves the opportunity to visit with Santa Claus,” Scheuch said, “so they can express their dreams and wishes and hopes. Because Santa is at least hopeful — there’s a chance.”

At the end of each visit, Santa gives children hugs.

“You don’t need to dwell on diagnosis, because it really doesn’t matter,” Scheuch said. “You’re visiting a child; you’re not visiting cancer or leukemia or a brain tumor. Children are going to be children. That’s why we do this.”