After three years, Potbelly Sandwich Shop has closed its doors at Cornerstone Commons in Mission. 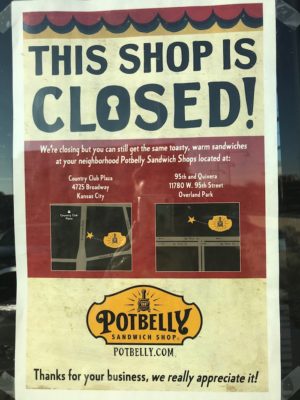 Opened in September 2015, the sandwich shop at 6803 Johnson Drive was the second of four new fast-casual restaurants to come to Mission as part of the development on the site of a former car dealership. Five Guys Burgers and Fries, PepperJax Grill and Pie Five, the other restaurants at the center, are still open.

Before opening in Mission, Potbelly had two additional Kansas City area locations, one on the Plaza and one in south Overland Park. Now, Potbelly has a total of five in the metro area, four of which are in Johnson County.