While Prairie Village city leaders and staff are fine-tuning design of the future North Park, they sought feedback from residents this week on some of the finer details.

Over the summer, BBN Architects took feedback from council and refined the top-level concepts into a workable plan for the public to view. Residents got to see the big reveal of the final design plan for North Park, which will be located at 67th Street and Roe Avenue, in an open house Tuesday at the community center.

Residents also had the opportunity to weigh in on design feature options for the shelter and seating styles within the shelter, restroom and playground equipment style, and also add their preference for an additional pathway from the trail to the garden area.

Councilmember Chad Andrew Herring, chair of the city’s park and recreation committee who also serves on a steering committee for North Park, said the city received mostly positive feedback at the open house.

“This park filled a need,” Herring said. “There was only kind of a small park in the northern part of Prairie Village and that park only has a playground for younger kids. This park is going to have a playground for kids of all ages as well as some of the new ideas about adult repose, adult recreation. Combining those spaces has garnered really positive feedback from the community.”

Here’s a look at the final design concept: 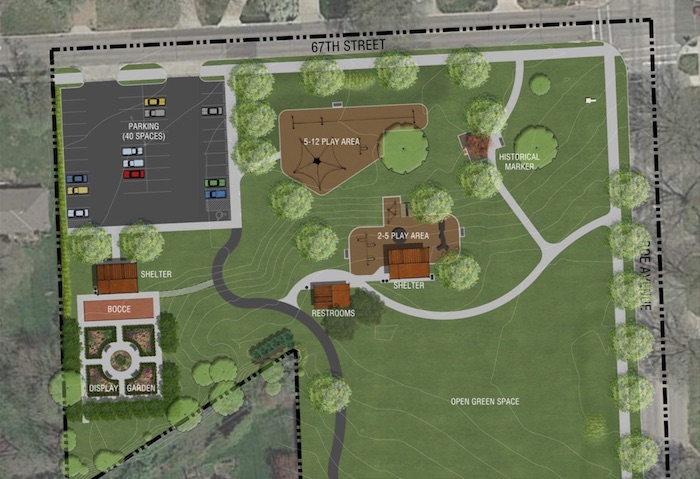 Herring said the plan for the park is “pretty defined at this point.” The play areas will have an adventure theme, including a zipline, Pentagode, traditional play sets, chimes, swings and a slide along the hill. Other features include a garden, bocce pit, gathering space at the shelter and an open grassy area, as well as a quarter-mile trail.

Prairie Village resident Ben Washburn, who has two small children, said he’s “really pleased” with the park plan, with “premium” features such as the zipline.

“I came and spoke at city council in April, and I made three requests for a splash pad, a climbing feature and a zipline, and tonight I see that we’re going to have the zipline and the climbing feature,” Washburn said. “I’m really pleased to see the responsiveness that the city had to my request. I’m really happy to see the increase in quality of features that they’re going to put into this park.”

Washburn said he also appreciates the transparency and receptivity of the city during the process. He also thanked councilmember Jori Nelson for her efforts in acquiring the property for a public park.

Herring said the city is still on budget with $1.1 million allocated to the park. That includes about $350,000 to demolish Faith Lutheran Church, which had occupied that space for several decades before the church disbanded and sold the property.

City staff and the steering committee plan to give the council an update on North Park in December or early January, “assuming we have mainly positive feedback tonight,” Herring said. The project will then go to bid, with construction to begin when the weather warms up. North Park is expected to open in mid- to late summer 2019.