The Lenexa City Council on Tuesday night unanimously approved rezoning and a preliminary plan for the Villas at Waterside, a 288-unit apartment complex at the southwest corner of 81st and Flint streets, despite opposition to the project voiced by several nearby residents at the meeting.

The developer, Block Real Estate Services LLC, based in Kansas City, Mo., plans to build a four- and five-story apartment building; a lower-level parking garage and surface parking lot; and three ponds and a walking and running trail on the property, according to a Tuesday memo to the council from Community Development Director Beccy Yocham and Planning and Development Administrator Magi Tilton.

The project is estimated to cost just over $50 million, said William Block, assistant development manager for Block Real Estate Services. Block’s current plan is to start construction in spring of 2019 and finish in late 2020.

The council approved rezoning 8 acres from BP-2 (Planned Manufacturing Zoning District) to RP-5 (Planned Residential High-Rise High Density) for the project; the rezoning is inconsistent with the future land-use designation dictated by the city’s comprehensive plan, Tilton said in a presentation to the council.

Here’s a look at the proposed site layout: 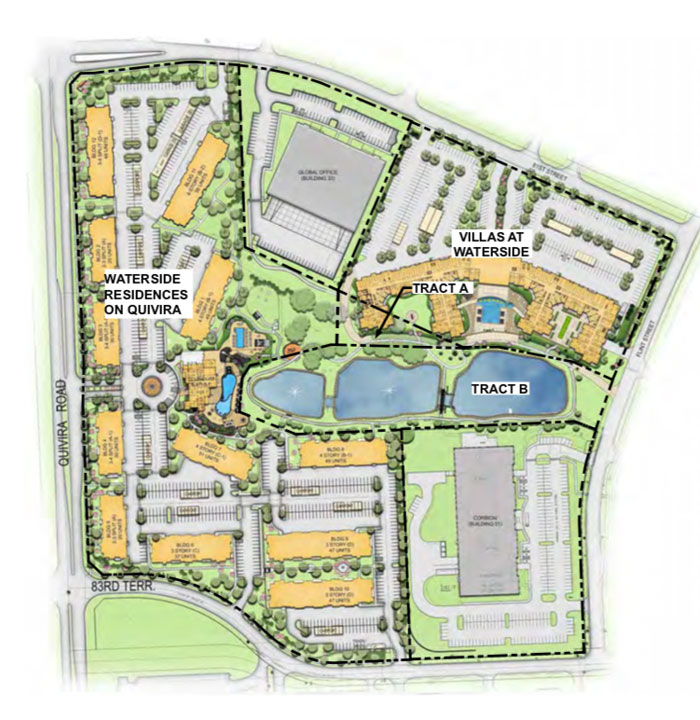 The council approved two rezoning requests, in 2015 and 2017, to allow the nearby Waterside Residences, also developed by Block Real Estate, which contains 484 residential units on 20 acres of the super block. The company also developed the nearby Pine Ridge Business Park in the 1980s.

In a presentation to the council, Ken Block, managing principal of Block Real Estate Services, said he had been doing business in Lenexa for 37 years, which had accounted for $1.45 billion of developments.

“So, what that tells you is I really like Lenexa,” Block said.

About three and a half years ago, Pine Ridge Business Park’s occupancy was down, he said, which prompted his company to build Waterside Residences. Pine Ridge’s occupancy has averaged 95 percent in the past year and a half.

“Businesses now can attract the younger millennials who want to live close to where they work,” Block said.

Several area residents at the Nov. 5 planning commission meeting and at a public hearing at Tuesday’s council meeting expressed concerns about the project based on the amount and speed of traffic, the absence of sidewalks along Monrovia Street in the Four Colonies development west of Quivira, the building size of Villas at Waterside and the project’s density. Others expressed concern about the planned apartments’ location near businesses that have truck deliveries.

Jim Buffington, treasurer of Four Colonies, told the council that there were “not but maybe a handful of our 681 homeowners in favor of adding more apartments to Waterside.”

“There’s a natural fear of increased traffic,” Buffington said. “In fact, we would vote for another development if we had the choice, well before more apartments.”

Four Colonies’ residents are concerned about drivers on Monrovia who routinely cross from the north side of 79th Street and use Monrovia in the complex as a shortcut, and who routinely exceed the posted 25 mph speed limit in the process, he said.

Another Four Colonies resident, Cheryl Ryan, addressed Block during the public hearing and said she had “noted recently that your family was extremely generous in gifting money to our hospitals.”

“What we’re really concerned about is somebody’s going to lose their life in Four Colonies (because of the lack of sidewalks and increased traffic),” Ryan said. “In your generosity, could you not put sidewalks on Monrovia and help Lenexa and not wait until somebody loses their life? It might be a good way for you again to show the nobility of your family.”

Ward 3 Councilman Corey Hunt said he thought Villas at Waterside was “a good use of the land … (and) the building is an exciting design … unique, contemporary and exciting. I hear all the time, ‘Why are we spending so much money west of 435 in Lenexa?’”

Ward 4 Councilman Andy Huckaba said that traffic problems had already existed on Monrovia and that he didn’t see a “huge impact” of increased traffic there from the project. He said that the council should look for solutions to the traffic problem but that “I don’t see where that would cause me to pause on this development.”