The developer behind the Metcalf Crossing project that will replace the blighted Ramada Inn and Knights Inn at Shawnee Mission Parkway and Metcalf told the Overland Park Planning Commission Monday that they had not been able to find a new hotel operator for the site.

Attorney Korb Maxwell speaking on behalf of developer Sky Real Estate said that after considerable effort, the company had determined that it was best to abandon the initial plans to include a new hotel as part of the redevelopment project.

“We thought that this was a hotel site. We went out and we had early indication from some of the hotel chains and franchisees and franchisors out there that this could work for a hotel site,” Maxwell told the planning commission. “But after substantial work by Wes Grammer, the developer for the site, and working every one of the significant hotel chains, and many different franchisees, we could not come to a hotel deal.”

Instead, Sky has submitted a new preliminary site plan for the 5 acres of land that includes a single story office building on the western portion of the property where the hotel had initially be envisioned. Here’s an elevation drawing of that proposed building that was included in Monday’s commission packet: 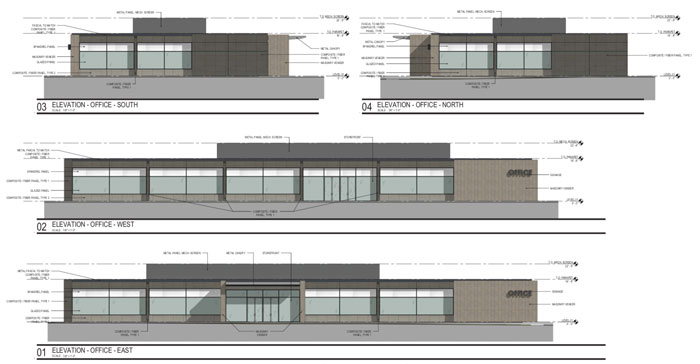 Maxwell said the developer did not have a confirmed use or tenant for the new office building yet, but that they felt it was important to move on from the hotel concept.

The Ramada and Knights Inn had long been a point of contention for the surrounding homeowners and city officials, who witnessed the properties become the subject of frequent calls to the police to respond to crimes.

“The single greatest concern I think this commission heard, the council heard, from the neighbors and others as we were in this process was they were concerned about the hotel,” Maxwell said. “Because they wanted it to be a hotel of quality given what the hotels that have been there did to their quality of life for so many years.”

The updated plans submitted Monday also included a change to the planned self storage facility on the site, which will now include a basement.

Sky’s initial timeline for the project suggested the self storage facility would be completed by the end of 2020.