One month after angrily calling out developer Ken Block for “bait and switch,” the Overland Park City Council has patched things up and is ready to go ahead with adding two drive-thru restaurant sites to the Galleria 115 center.

The council had sent the retail and multi-family project at 115th Street and Nall Avenue back to the planning commission, but changed its mind after hearing a detailed presentation by Block. In the end, council members voted to revisit the plans, ultimately voting 9-2 to approve the changes. Council members Faris Farassati and Gina Burke voted against.

The revisions had mistakenly been put on the non-controversial consent agenda a month ago, leading to a misunderstanding about how much of a presentation would be given, said Councilmember Paul Lyons as he asked that the council reconsider. A renewed discussion would allow Block a better chance to explain the reasoning for the plans, he said.

After the presentation, a majority said they were convinced that Galleria will become a worthy competitor to upscale Leawood shops and would attract nearby officer workers and people from the convention center. At the October meeting, some of the same council members said they feared the additional drive-thru restaurant sites would cheapen the development with fast-food vendors.

Councilmember Curt Skoog, who a month ago said the revisions were “bait and switch,” said Block’s comments about the changing restaurant industry have made him more comfortable with allowing the drive-thrus.

“Development has always required trust and some people have burned our trust in the past, “he said. “That’s why we’re sometimes quick to react.”

Block told the council that the drive-thrus are needed because restaurant patrons now expect to order food online and then pick it up or have it delivered. Average lunchtimes have dwindled to a half hour, he said, and the addition of Uber Eats and Grubhub have changed the landscape for restaurants, with many more people using delivery or drive-thru for even higher quality restaurants. Nowadays, restaurants like Panera don’t want to open a new location if a drive-thru option is not included, Block said.

“In the future, no restaurant won’t have a drive-thru,” he said. 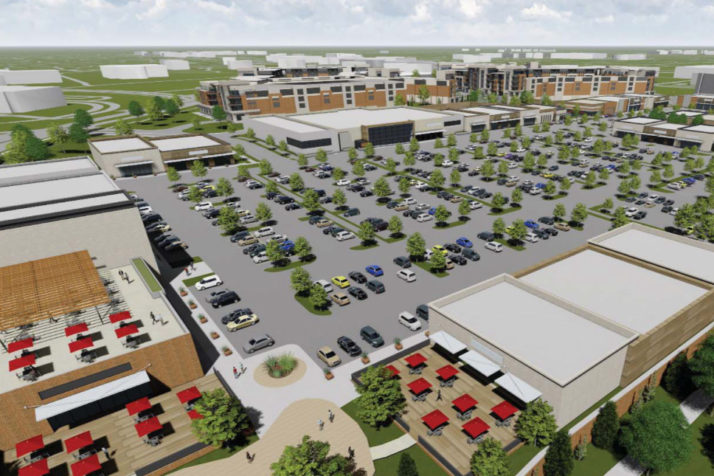 The Galleria plan will need a mix of restaurant types on its seven pad sites, he said, but pledged they will be quality restaurants. He mentioned Panera Bread and 54th Street Grill & Bar as possibilities.

The $252 million Galleria project is considered by the council an important first step toward revitalizing the College Boulevard corridor with a more walkable atmosphere that will draw office workers and conventioneers. That street is now dominated by fast traffic, with entertainment and night-life business flowing more toward Leawood.

The development got off to an awkward start after it was proposed about a year ago as a joint venture between Block and Dallas-based The Retail Connection. Block was to handle the multi-family part, but TRC eventually backed off the retail side, and Block decided to take it on himself.

Shortly after, Block said he conferred with other Kansas City retail experts and discovered numerous shortcomings in the plan TRC had drafted. “The retail guys said there were so many things in here that won’t work this plan is dead on arrival,” he said of the original version.

“You can’t put seven sit-down restaurants next to each other. They cannibalize each other,” resulting in failure, he added.

On questioning, Block said he wasn’t prepared to name tenants for the entertainment part of the development. But he mentioned game centers like Punch Bowl Social or Main Event Entertainment as examples of how he’s thinking.

Council members Farassati and Burke pointed out that the amended plan is the same as the one the council bounced back to the planning commission a month ago. Farassati said there’s no real guarantee that the center won’t have fast food tenants. “I don’t see anything new that would change my decision,” he said.

Block pointed to his history of quality development in Overland Park. “It’s out of my realm of thinking that some other restaurants would fit this site,” he countered. “I’m a high-end developer.”