The Prairie Village city council this week advanced a plan for improving Harmon Park in the coming years that includes installation of an inclusive playground, reconstruction of the city’s deteriorating skate park, and the installation of a 48′ by 40′ concrete pad that would serve as the performance space for events like the city’s annual Jazz Festival.

The inclusive playground, which is budgeted at $575,000, and the reconstructed skate park, which is budgeted at $320,000, have been part of the city’s parks investment plan for several years. The performance pad, which public works officials estimate would cost $100,000 to build, could represent a first step toward a more permanent performance structure that the council has considered as part of the broader Village Square proposal late last year.

Here’s a look at public works’ proposed layout for the rebuilt skate park and the performance pad: 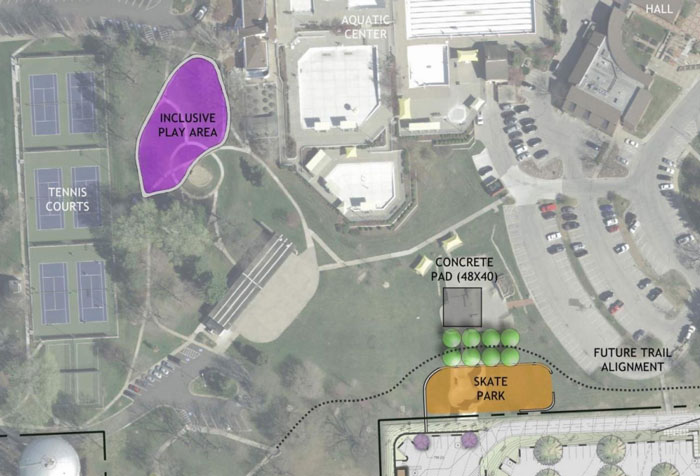 First championed by council member Brooke Morehead in 2016, the Village Square proposal cost the city $50,000 in economic development funds to develop. But the consultants’ concept including new park pavilions, a splash pad, and a permanent performance pavilion came with an estimated price tag of more than $5 million if fully executed — a figure that caused controversy among some members of the council who thought the project’s proponents had not effectively communicated with residents about its financial implications for the city.

The performance pad proposed as part of the parks improvement plan for 2019 and 2020 would be substantially less expensive than the structure envisioned in the Village Square concept, and would allow for the construction of a temporary stage to host the annual Jazz Festival and possibly other events.

“The performance pad could also create other opportunities throughout the year, including movie night as well as other small performances,” Public Works Director Keith Bredehoeft wrote in a memo to the council. “Permanent power can be provided relatively easily as the new Fire Station project installed KCPL equipment that makes this much easier and less costly to install.”

Monday’s 10-2 vote was just the first step in getting the performance pad approved. The project would require a formal budget vote by the council at a later date to become reality.

Councilmembers Jori Nelson and Dan Runion voted against the motion to advance the package of parks improvement elements, saying they had concerns with the idea of the performance pad and its impact on park green space.