A Shawnee man who served as a Republican Party precinct committeeman is resigning that position after his comments attacking Democratic Congressional candidate Sharice Davids were reported by the Kansas City Star.

Michael Kalny posted a message on the Facebook page of Anne Prichett, a leader of the Johnson County Democratic Women, on Sunday attacking her and her “comrades stealth attack on Yoder.” The message went on to say that “Your radical socialist kick boxing lesbian Indian will be sent back packing to the reservation.”

Davids, a member of the Ho Chunk Nation and graduate of Cornell Law School, would be the first Native American woman to serve in Congress if elected, and the first openly gay member of Congress from Kansas. After working at Sonnenschein Nath & Rosenthal LLP (now called Dentons) for two years following law school, she moved to the the Pine Ridge Indian Reservation in South Dakota and worked on economic development issues. She then went on to serve as a White House fellow. 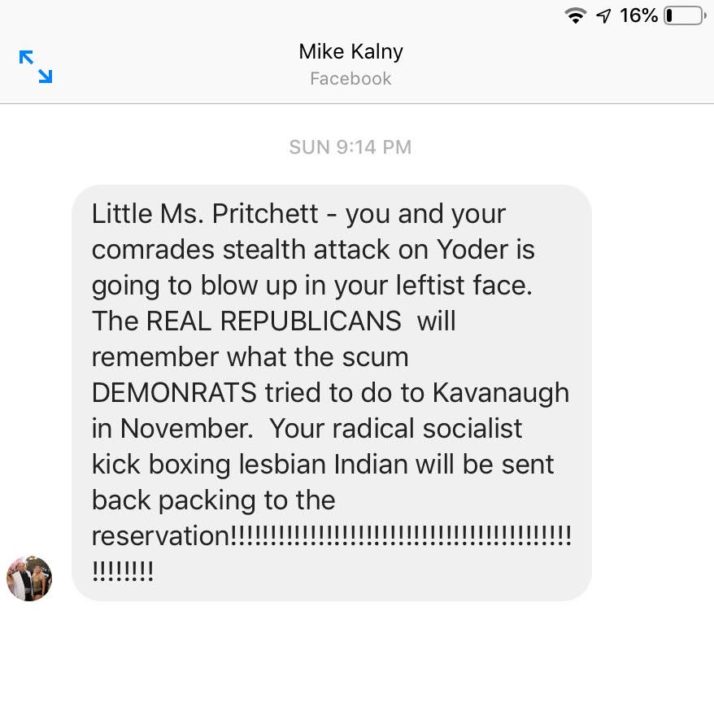 Johnson County Republican Party Chair Mike Jones told the Sunflower State Journal Wednesday that Kalny had tendered his resignation as a precinct committeeman without being asked.