Lenexa is embarking on a study of its streets, sidewalks and trails to develop a blueprint for future transportation infrastructure.

Lenexa and Olsson & Associates hosted an open house Wednesday, Oct. 3, at Lenexa Public Market to kick off the city’s Complete Streets program. During the open house, residents came by to provide feedback on what roads, sidewalks and trails they use, and where they find gaps in the system.

Jeff McKerrow, an engineer with Olsson & Associates, a contractor for the study, said the kickoff starts the process of collecting feedback from Lenexa residents on their transportation habits and needs.

“We’re going to let people have that opportunity to hear a little bit about what we’re doing forward, but also to tell us what they see today in the community,” McKerrow said. “Where do they walk? Where do they bike? Where would they like to walk or like to bike but can’t? What barriers do they see out there that keep them from doing that?”

Steve Schooley, transportation manager, said developing a plan for connectivity in Lenexa is an important step in accommodating all users of the city’s streets, sidewalks and trails.

“The reality of it is we may not be able to accommodate everybody in every location, but I think it’s important that we have a plan we can use as we take this journey,” Schooley said.

Lenexa hired Olsson & Associates and Toole Design for about $199,000 to conduct a study for developing a Complete Streets plan. The project is an unbudgeted item, but Schooley said city staff indicated it was a priority to start right away.

After collecting feedback from residents over the next several weeks, Olsson and Lenexa will analyze the data and share their results in a series of public meetings, which will probably begin next year. Then, Olsson will begin developing a Complete Streets plan for the city.

Here’s a look at how residents provided feedback of their transportation needs and habits on a map of Lenexa: 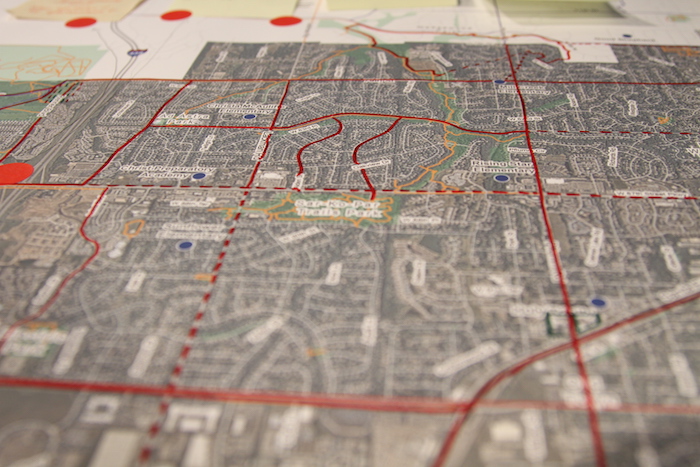 McKerrow said Lenexa is taking next steps as the city evolves to provide good infrastructure for its residents.

“That doesn’t mean that every street has a bike lane, or every street necessarily as sidewalks everywhere,” McKerrow added. “But it’s that we make good decisions moving forward so that we’ve got a great network that really helps everybody get around.”

Once the study is complete in spring of 2019, Lenexa city staff will use the results to focus transportation infrastructure projects for the future, Schooley said. Some of the projects inspired by Lenexa Complete Streets will be “fairly easy” to complete, while others may take 20 or 30 years.

Ultimately, the study will give Lenexa a guide to methodically build out comprehensive streets, sidewalks, bicycle lanes and trails in areas that residents have said that they use.

“I think it’s important that we have a defined plan, a defined process, of how we’re going to evaluate our streets and street projects and plan our street system as we build it out,” Schooley said.