The Lenexa City Council on Tuesday unanimously approved holding a Nov. 6 public hearing to consider a redevelopment tax-increment financing (TIF) project plan for the Vantage Point office project in the Mining TIF District which would allow the developer to receive as much as $26.7 million in reimbursements for eligible project costs.

The TIF project plan covers about 32.5 acres at the northwest corner of Renner Boulevard and 93rd Street, according to a Tuesday memo from Assistant City Attorney Sean McLaughlin to the council. The developer is VP Lenexa LLC, a subsidiary of Wichita-based Vantage Point Properties Inc.

Here’s a map of the project site that was in the council packet: 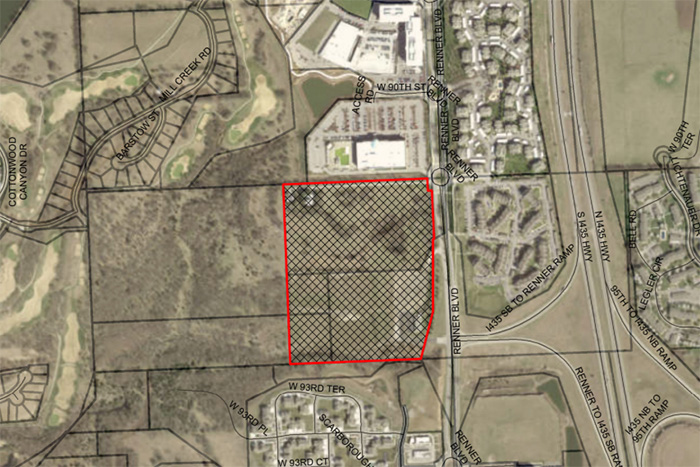 TIF is a public financing tool by which a developer of a blighted property is reimbursed for eligible development and infrastructure costs using the increment of new property or sales tax revenue generated by the development. Consideration is given to whether a development wouldn’t be financially feasible but for TIF.

The TIF project plan also would allow the city to receive reimbursements for as much as $17 million for eligible costs for public streets and other infrastructure in the Mining TIF District. Final terms for eligible costs and other agreement details would be provided in a disposition and development agreement. Generally, those terms would include:

The Lenexa Planning Commission determined at its Monday meeting that the proposed plan was consistent with the city’s comprehensive plan. City staff recommended approving the resolution authorizing the Nov. 6 public hearing.