Unleashed Pet Rescue staff and volunteers returned Wednesday evening with 71 dogs, all rescued from animal shelters and flooded areas in the path of the storm. 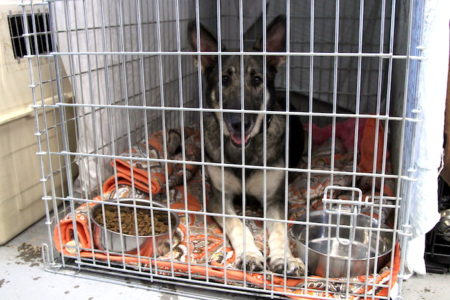 “The girls just jumped in the van and took off because they knew that help was going to be needed,” said Kristen Saluto, director of operations at the animal shelter and adoption center on Broadmoor Street. “We basically cleared out the surrounding shelters so those shelters were able to take in the strays that were coming in from the hurricane,” Saluto said. “Many of the dogs were flood victims.”

Once they got on the road, the rescue team started reaching out to animal shelters in North Carolina to see where they could help. They arrived Sunday, Sept. 16, and returned Wednesday to an outpouring of support outside of the adoption center.

“When I pulled in with the convoy of vehicles, I could not believe the amount of supporters that there were,” said Danielle Reno, one of the rescuers, in a Facebook live video Thursday afternoon. “If we wouldn’t have taken these dogs, they would have been forced to put them down in order to save more from the hurricane.” 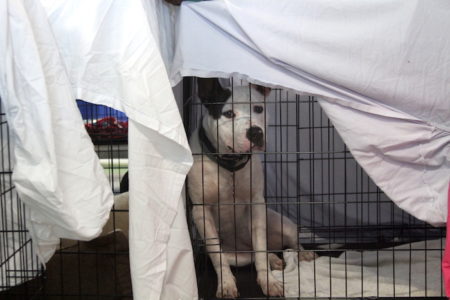 Reno also announced that a donor has “graciously” agreed to make a matching donation up to $5,000. The donations will help the dogs make a full recovery, Reno added. By Thursday afternoon, Unleashed had raised $495. As of Friday morning, it has raised $2,730.

Some of the dogs had wounds, fleas, heartworm and signs of malnourishment. Reno said the dogs are in need of foster homes.

The next step for the dogs is getting them adopted. In the meantime, Unleashed Pet Rescue is in need of large and extra-large crates (plastic or wire), bleach and paper towels for sanitation, odor disinfectants and monetary donations.

“It’s for the animals,” Saluto said. “They have no voice, and we are their voice, so it’s important that we save their lives.”