Bicyclists stopping by downtown Overland Park will soon have many more places to hitch up. The city is in the process of getting 37 new racks to be distributed throughout the downtown area.

“Downtown is a natural destination for bikes but there are really very few racks,” said Doug Johnson, of the city’s planning and development department.

That will change with the acceptance of a proposal from BikeWalkKC that the city council approved Monday night.

The bike racks come at no cost to the city. Instead, the $9,270 to install them will come through the Johnson County Department of Health and Environment’s LiveWell initiative, which provided the grant money. Maintenance will be done by the city parks department.

Once the parks department approves the rack locations, the racks can be ordered. Johnson said they may be installed yet this fall.

Here’s a map of the proposed spots for rack installation (click to enlarge): 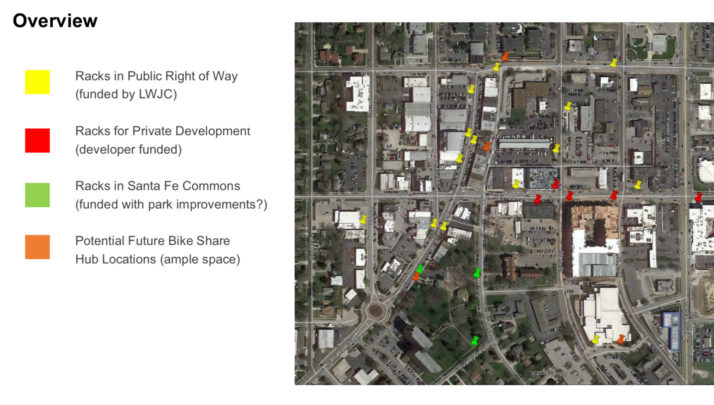 The racks will also be a branding exercise of sorts. They will come in two styles, each featuring a circle with an Overland Park-inspired design in the middle, Johnson said. The racks have spots for bicycles on each side, with a space for the bike lock to go through the circle. A “bike corral” design features a bicycle shape at each end with the circular racks in the middle.

The 37 racks are just a start. The city also hopes to eventually install similar racks at the redesigned Santa Fe Commons Park and near such developments as The Vue and Edison District. However there is no funding in the pipeline yet for those.