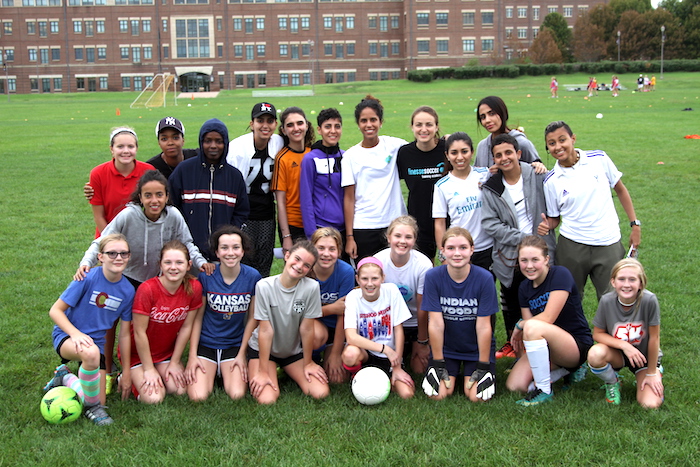 Out on the spongy, rain-soaked soccer field on the Sprint campus, young women from Saudi Arabia shared the love of the game with girls from all over Johnson County last week.

What brought this international group together under the stormclouds Thursday afternoon was Finesse Soccer, a training academy founded by Carrie Fry Robinson, a graduate of Shawnee Mission East High School.

FHI 360, an organization that manages the U.S. Department of State’s Sports Diplomacy Division programs, had asked Robinson if Finesse Soccer would host 12 women from Saudi Arabia to observe one of her soccer clinics. 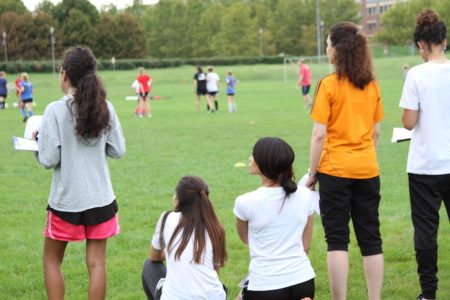 “They liked that we’re all-female training staff, and we only train girls in our programs,” Robinson said. “Our focus is on empowering girls through skills training and mentorship.”

This particular clinic by Finesse Soccer was training seventh graders from Brookside Soccer Club and their coach, Brian McDaniel, on team-building skills.  Meanwhile, these women are also gaining cultural experiences with young Americans. So, they are spending a few weeks in Kansas City to gain not only soccer coaching certification through United Soccer Coaches, but also skills in women’s empowerment, gender equity, restorative justice and leadership.

Part of those experiences included a clinic Friday evening with refugee girls and Finesse Soccer at Global FC.

“Our goal is to light that fire inside little girls and to make soccer fun again, because a lot of the pressures around clubs and teams are intense,” Robinson said, “and girls quit because they don’t want to play anymore because it’s not fun. We’re a training organization aimed at keeping girls in the sport and giving them additional skills training.”

Robinson said she hopes to demonstrate to the Saudi women her particular upbeat coaching style as one way to connect with young, female players.

Many of the Saudi women are already coaching back home, but this training and certification helps strengthen their skillset.

Bayan Mohammed, a 23-year-old soccer coach from Jubail Industrial City, said she’s learned some valuable coaching techniques and leadership training. But the best part for her has been playing soccer with her new friends, many of whom played before they started coaching.

Lama Al-Hanaki said she’s also learned about the variety of soccer programs in America, and how it seems the sport is dominated by female players.

“It’s the opposite, completely, back in my country and the Middle East in general… and I think worldwide,” Al-Hanaki said, adding that she was “shocked” to see very little support in Kansas City for girls and young women in America who want to play sports like baseball. “Now, I realize it’s a global thing when there’s something more common for males, it’s less fortunate for the girls.”

Managed by FHI 360, Sports Visitors are non-elite youth athletes, coaches and administrators who travel to the United States for a short-term sports cultural exchange with American peers and sports practitioners. The Saudi women are halfway through their program, during which they participate in clinics and sessions on leadership, team-building and conflict resolution, as well as on America’s experience with inclusion and equity in sport.

These young women are the first generation of female soccer coaches in Saudi Arabia, an FHI 360 fact that impressed Robinson.

“I hope that just the little bit of what they learned from me can make it back to girls in Saudi Arabia,” she said. “I’m excited that these women will have me as a mentor and have that input in helping them be better coaches too.”