One of the cornerstone pieces of the new development on the former Meadowbrook Country Club site is almost complete.

VanTrust Real Estate reports that it will mark the grand opening of The Kessler, a 282-unit apartment complex on the east side of the property, September 27. Residents have already moved into the building, but crews are polishing off the final phase of construction with expected completion within the next couple weeks.

The complex has a mix of studio, one-bedroom and two-bedroom apartments. Billed as a “luxury” complex, The Kessler features a clubhouse, 24-hour fitness center, a private dining room for residents to entertain guests, an outdoor kitchen and a courtyard with a pool.

Work on other parts of the private development on the site continue as well. On Monday, the Prairie Village City Council approved the issuance of industrial revenue bonds — which exempt the developer from paying sales tax on construction materials — for the new Meadowbrook Inn project, which will sit west of The Kessler. The inn, which will have 54 rooms for guests as well as exterior spaces for events and an attached restaurant and cafe, is expected to be complete by the end of next summer.

Meanwhile, work has begun on a number of the single family home and townhouse lots that sit to the south and west of The Kessler.

The public park that will take up approximately 80 acres of the 135 acre site had initially be set to open to the public in April, but bad weather and wastewater infrastructure issues have caused significant delays. Johnson County Park and Recreation District said earlier this summer they hoped to open the park in late summer or early fall of this year — but no opening date has been announced.

Meadowbrook Park is almost complete. Here’s the work still left to do on site

Grand opening for Meadowbrook Park postponed to June 22, but much programming will start sooner

Meadowbrook Park was supposed to open in April 2018. What’s been the hold up? 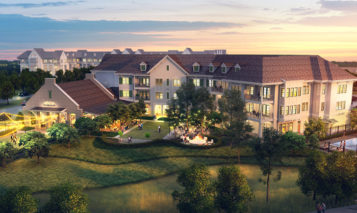