Golden & Pine celebrated its grand re-opening after moving from Brookside to the Village shopping center in Prairie Village.

Local makers came out to support Golden & Pine’s re-opening at a reception Thursday evening at 19 On the Mall. The shop sells handcrafted or ethically made home and garden items.

Stephanie Agne, owner of the shop, said the move to the Village allowed her to expand the shop’s wares to include furniture, custom rugs and smaller “gifty” items for shoppers on the go. She also added a section for baby gifts and decor for nurseries.

Golden & Pine is also planning to resume workshops similar to those it offered when it opened in March 2016. These include floral arrangements, calligraphy and weavings.

Agne said she tripled her retail space by moving to the Village in Prairie Village, with roughly 3,500 square feet to make room for the expansion of her product line. 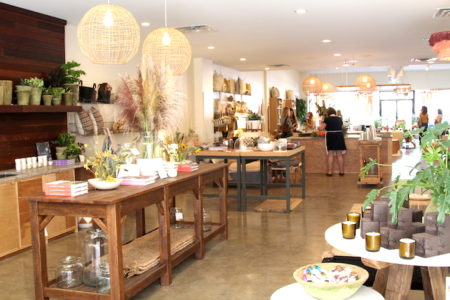 “We also do story cards on everything that tell the story behind the product,” Agne said. “So if anyone is interested in knowing all that, we talk about the company and why we think it’s a company we want to support here.”

Golden & Pine houses products that are made in Kansas City as well as products from all over the world, such as South America and the Middle East.

“We try to share those stories everywhere,” Agne said. “We mainly look for that story to be there behind the product, whether it’s made in Kansas City or made in East Africa.”

While Agne is proud of her handcrafted products and the successful move and remodel of her new space, she had to speak to her team’s collaboration, especially during the transition.

“Every one of them was willing to do the full gamut, and even in a really hectic two weeks, we still had a really great time,” Agne said. “It just makes me feel the proudest.

“Also, I think a lot of them really connect with our mission and with what we do too, so they get as excited as me when we open new stuff we haven’t seen before. It’s a fun atmosphere.”