Merriam celebrated the beginning of construction for its new $30 million community center with a groundbreaking ceremony Thursday morning.

Residents, city leaders and representatives from the contractor, McCarthy Building Companies packed into the upstairs training room of city hall as a thunderstorm, which forced a last-minute relocation of the event, rolled through town.

Mayor Ken Sissom said talks for the city to build a new community center began in 2014, prompted by major expenses from maintaining two of the city’s facilities, the existing Irene B. French Community Center and the Merriam Aquatic Center.

After several studies and soliciting feedback from residents — including “an overwhelming majority” of yes votes, Merriam leaders decided to “make the wise decision” of building a new community center, Sissom said.

“We’ve spent many countless hours this year coming up with a plan to give our residents what they wanted in a new community center,” the mayor said. “Complete with an indoor and outdoor pool, indoor walking track, state-of-the-art fitness center and a child watch area, we are excited that this day has finally come, and we believe our residents will love the end result.”

McCarthy Building Companies is constructing the community center, with an expected completion in 2020. Steven Meuschke, vice president of operations, said everyone at the company is excited to be a part of this project as it shapes the Merriam community.

“I didn’t know if most of you knew this, but rain on a groundbreaking for your project is similar to rain for your wedding: It’s good luck for the project,” Meuschke said. “I made that up this morning, but this will be a great project.”

Meuschke said the collaborative effort from city staff, residents and the design committee has been “amazing.” 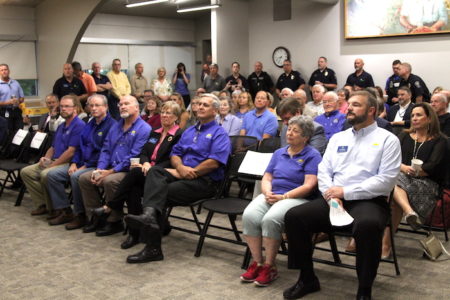 Chris Engel, city administrator, thanked current and past city councilmembers as well as the public for not only braving the bad weather to kick off the city’s multi-million dollar project, but also for their contributions to the city and residents.

Engel also thanked the city staff and design committee for taking feedback from residents on the new community center and working hard to incorporate their many wishes into the master plan.

“As much as I think we would all like to be outside, I think it’s actually pretty appropriate — something that struck me a few minutes ago — that we’re actually underneath the Merriam history mural,” Engel said. “We’re in front of the history mural where we’ve got past leaders in our community who have made hard decisions, who have trudged across the plains and built this community of values and ideas into what it is, which is truly a ‘just right’ community.’”