A group of residents calling themselves “Merriam Concerned Citizens” packed the city council meeting Monday in an effort to lobby against the destruction of the current swimming pool to make way for a new aquatic and community center.

The public comment period Monday evening went on for more than an hour as about 20 people came forward to express concerns voiced at previous council meetings and open houses, saying the proposed outdoor pool for the new $30 million community center is too small with too few amenities to fit poolgoers’ needs. The project includes an additional $6.6 million in tax increment financing (TIF) funds for the parking structure and associated construction costs.

A number of the residents who spoke at the council meeting said they were part of the Merriam Concerned Citizens group, which has launched a website to list their concerns online with the new community center and design processes. Their main concerns are with dividing the outdoor aquatics into smaller, separate indoor and outdoor facilities and losing outdoor amenities such as waterslides and a kiddie pool.

“Do not touch the outdoor aquatic center unless you try to improve it,” said Cherie Nicholson, a Merriam resident who has young children. Nicholson was among the residents who said they were against allowing the Johnson County Library to relocate its Antioch branch to the community center campus.

John Steeb, another resident, said many people were against having a smaller outdoor pool.

“I think it’s very important that we keep the existing pool and fix it,” Steeb said. “I think it’s a concession that can easily be made.”

In response to these concerns, the city updated its online list of frequently asked questions regarding the community center plans. That page includes a graphic that shows the proposed new outdoor aquatics facility overlaid with the current pool: 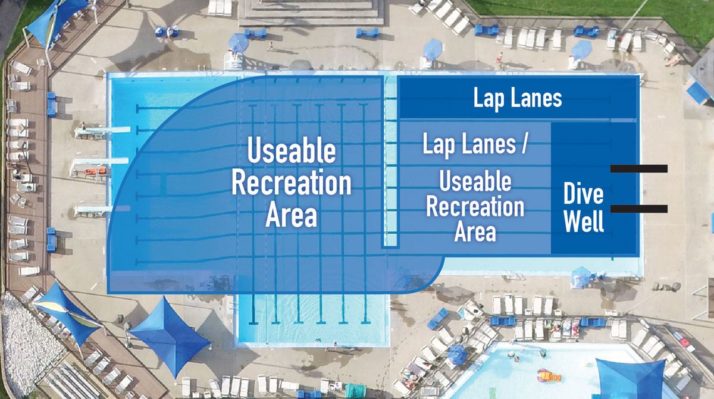 A study conducted by a hired firm a few years ago estimated that repairing the current Merriam Aquatic Center to bring it up to compliance with the federal Americans with Disabilities Act would cost about $3.5 to $4 million.

If the city continues on its current timeline with building a new community center, demolition of the aquatic facility at Vavra Park will begin in October. A groundbreaking ceremony for the whole project is set for Thursday morning.

Councilmember Al Frisby asked the staff to look for funding options in the budget that would allow option 8 of the outdoor aquatic design, which would separate the dive wells from the lap lanes. Option 8 would be $2.5 million over what the city originally budgeted for the project.

The council had selected option 5 in its July 23 meeting, which will cost an additional $1.6 million over the original budget.

At the conclusion of the council work session following Monday evening’s meeting, Merriam staff are moving forward with plans for an outdoor 25-meter pool — it was previously planned to be 25 yards.

The council is scheduled to make final decisions on community center design, including outdoor aquatic concepts, at its Sept. 24 meeting. Some councilmembers said they were concerned with delaying the project further because it will cost the city and residents more time and money.