The Lenexa City Council has approved the final plan for The Yard, an estimated $15 million mixed-use office, restaurant and outdoor-entertainment development planned for the southeast corner of 87th Street Parkway and Renner Boulevard in Lenexa City Center East Village. 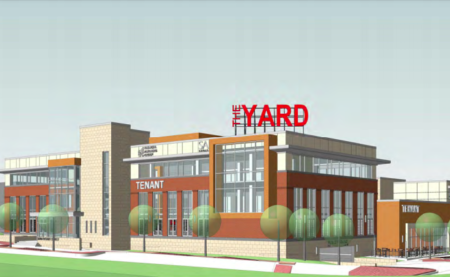 Plans call for a four-story, L-shaped building with two stories of office space on top of two stories of structured parking, and two levels of retail and restaurant space, according to Development Administrator Magi Tilton in her address to the council at its Tuesday meeting and to a council memo.

The Yard’s outdoor patio space is planned to be integrated with the restaurants and to include pickleball and shuffleboard courts, multiple gathering spaces and seating, a firepit, restrooms and a host station. The Lenexa Planning Commission recommended approval of the project’s final plan at its Aug. 6 meeting, and city staff also recommended approval. The council on Tuesday also approved a public pedestrian access zone easement as part of the project.

Scott Anderson of CRQ Development is the project’s lead developer. He said Friday morning that he hoped to break ground early next year and complete the project by the summer of 2020. The Yard will contain about 22,000 square feet of office space and about 9,000 square feet for two restaurants and the outdoor uses.

Anderson is seeking about $2 million of public financing incentives through tax-increment financing (TIF) and the creation of a community improvement district (CID).

“To make this work, we need a certain amount of public participation,” he said.

City Center East Village, on the east side of Renner and the south side of 87th Street Parkway, includes the B.E. Smith Building, Hyatt Place Hotel and Convention Center and Ignite restaurant.