District patrons and students who head into the Shawnee Mission School District’s Center for Academic Achievement this year may notice their trip to the front door being a bit less perilous than before — but the fix didn’t come cheap.

Contractors from J.E. Dunn this summer tore out part of the paved entrance on the south side of the building to replace a step that that had quickly become a tripping hazard after the building opened last year: 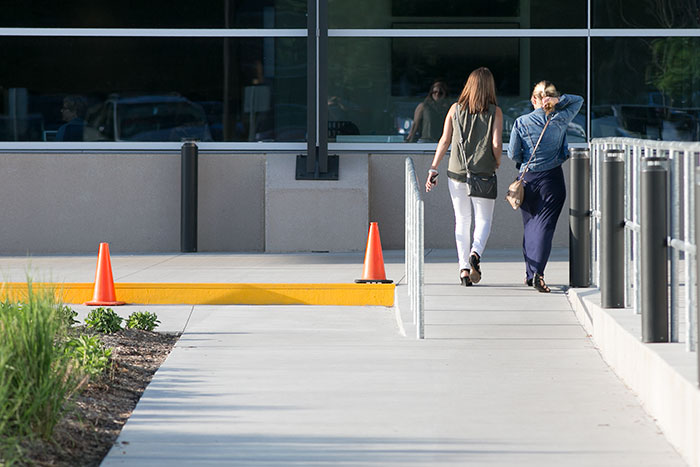 The district marked the step with yellow paint and cones last year in an attempt to mitigate the danger. But over the summer they had construction crews replace it with a gradually sloped concrete walkway.

The cost of the new ramp construction and associated drainage updates was $132,337. It was funded through the district’s capital expense budget — funds that cannot be allocated to classroom expenses.

The district confirmed that the step that proved to be a tripping hazard had been part of the original building designs approved by staff.

The district this summer also spent just under $250,000 on the construction of a second bio-technology lab, additional office space and a student restroom at the center; and just over $19,000 on a project to improve the guttering and downspouts on the north and west sides of the building.

The $401,141 the district spent on fixes and additions to the center over the summer amounts to a little more than 1 percent of the original project budget of $33.5 million.