After Kansas legalized some industrial agricultural production of hemp earlier this year, a couple in Overland Park are planning to open a hemp store.

Heather Hobbs and Kyle Steppe, the co-owning couple behind KC Hemp Company, said they are selling “all things hemp” in their new shop in downtown Overland Park at 8124 Floyd St.

“The space smelled like doughnuts and grease when we took it over, so we had to do some nice elbow grease to get it clean,” Hobbs said, “but we hope to be able to bring that local Kansas City flair to this space, just like John’s Space Age Donuts did. He was a staple down here in downtown Overland Park.”

After Kansas governor Jeff Colyer signed a bill in April to create an industrial hemp pilot program, Hobbs and Steppe decided to “pave the way and get our footprint in the door so we can bring all of those hemp crops and everything that the farmers in Kansas are going to be making into the local market,” Hobbs said.

Kansas City has a few other stores selling cannabidiols, or CBD oils, and other medicated products, but Hobbs and Steppe said their store is stands apart because they will offer a variety of other hemp-based products as well. 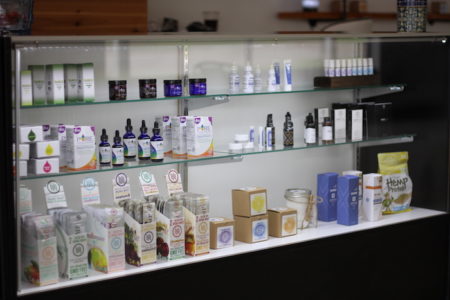 “We’re an all-encompassing hemp store,” Hobbs said. “If it can be made out of hemp, we are trying to get our hands on it to bring it to the market in Kansas City.”

KC Hemp Company will have CBD products (the sale and consumption of CBD in Kansas became legal in June), including tinctures, salves, lotions, soaps and bath bombs, but it will also carry other items made from hemp — textiles, clothing and paper, to name a few.

The hemp store will not, of course, be selling any products with THC — in other words, marijuana — for recreational use, which is illegal in Kansas, Hobbs said. Rather, he said, CBD oils tend to be used as dietary supplements.

“Hemp can save the world; it can completely change our planet,” Hobbs said. “We want to be on the forefront of that revolution that’s sweeping through the country, and we are so excited to able to bring it to the Kansas City, especially once our Kansas farmers start producing their own hemp and we can keep everything local here. It’s going to be great for the Kansas economy.”