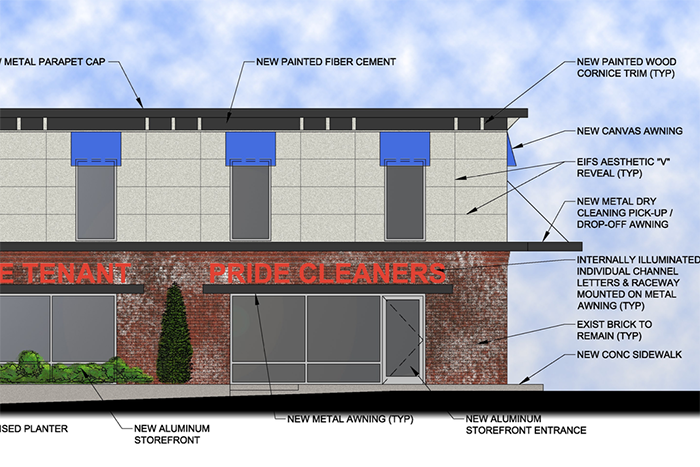 The vacant building at 5000 Johnson Drive recently purchased by Pride Cleaners was approved as a mixed-use district following Roeland Park councilmembers’ Monday vote. Councilmembers unanimously voted in favor of rezoning the long-vacant property from an office building district to mixed-use.

Pride Cleaners plans to be the only business operating in the building at this time but they have been in preliminary talks with a coffee shop as a potential first-floor tenant.

The building will undergo major exterior renovations, the parking lot will be reconfigured, and a sidewalk added to improve walkability. Despite major renovations the building will not comply with Johnson Drive Design Guidelines adopted within Roeland Park’s Comprehensive Plan, which was a major point of concern voiced by several councilmembers at the previous workshop.

Since the building is being renovated, rather than torn down and rebuilt, councilmembers were limited in amount of restrictions they could place on building design.

Kathleen Warman, of Warman Architects, also pointed out it would not be possible to comply with all of the design guidelines without first tearing the building down.

One sticking point during Monday’s discussion was whether or not to allow the site to have a monument sign. While Pride Cleaners was not interested in using that type of sign for their business, a potential future tenant may have interest in that type of advertisement, Warman said.

Councilmember Michael Poppa made a motion to allow the monument sign and the motion was seconded by councilmember Tim Janssen.

City assistant administrator Jennifer Jones-Lacy reminded councilmembers that allowing the monument sign would set a precedent for the remaining land parcels in that area. Jones-Lacy also noted that councilmembers did not allow the micro-hospital and Commerce Bank to add monument signs to the development on the northwest corner of Johnson Drive.

Councilmember Tom Madigan said he thought the northwest corner development was too different to compare to 5000 Johnson Drive, pointing out that the bank and hospital are highly visible buildings.

After a brief discussion Warman suggested keeping the monument sign off the table, since it was not a priority for Pride Cleaners at this time. If a future tenant expressed interest in having that type of signage Pride Cleaners could apply for it at a later date, Warman said.

Councilmembers agreed and voted to rezone the property, without allowing the monument sign.