As teardowns and new home development continues throughout northeast Johnson County so does the influx of large trucks delivering construction materials and equipment. While some city officials have concerns with how the trucks could impact city roads, others are less concerned by the frequent trips into the area by heavy vehicles.

Fairway’s Public Works Director Bill Stogsdill said he “absolutely” had concerns with how heavy trucks could impact roads but said “it would not be reasonable to require the demolition of a home to be removed a pick-up load of debris at a time.”

Fairway has received 12 permits for new builds so far in 2018.

Stogsdill also pointed out that the trucks the city uses for road repair are typically even heavier than those needed for residential home construction.

Fairway City Administrator Nathan Nogelmeier also said he had concerns with having the larger trucks on city roads but said that it was a necessary part of community improvement.

Nogelmeier noted that Fairway had been experiencing teardown/rebuilds for a longer period of time than some of its neighboring communities so the city was more used to dealing with construction vehicles.

“Any time you want to have reinvestment in your community you are going to have to deal with heavier traffic,” he said.

Nogelmeier also pointed out that trucks have a legal right to proceed to the address where they are providing services in Fairway.

Communities typically encourage heavy trucks making deliveries or providing services to travel to their destination using the most direct route and to utilize approved truck routes whenever possible. For example in Prairie Village there are five approved roads for truck routes (75th Street, 95th Street, Nall, and sections of State Line and Mission Road).

Leawood’s Director of Public Works David Ley said he had only noticed “minor surface issues” on the pavement of streets in new subdivisions that see heavier truck traffic.

Ley also said Leawood had not experienced any issues with storm sewers underneath pavement due to heavy trucks.

“I think we need to do as much as we can…to be sure we can build as quickly as possible to get them out — for the neighbors and for the streets,” Schermoly said.

Schermoly said she is in favor of tight restrictions related to new home construction, emphasizing that the city needs to keep in mind how construction can impact existing residents. 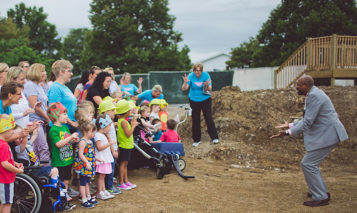