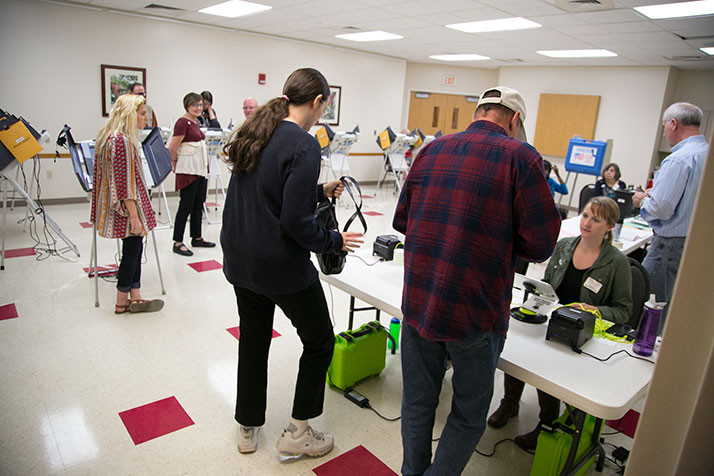 Then-Election Commissioner Brian Newby’s management style was creating a workplace environment that some staffers felt was toxic. There were serious concerns about oversight of the office’s finances.

“When the issues that were going on in the Election Office prior to Mr. Newby’s departure came to our attention, county management as well as human resources and the board of county commissioners, we asked for meeting with the secretary of state and his appropriate staff,” recalls County Chair Ed Eilert. “We shared all of that information with the secretary of state.”

The hope, Eilert suggested, was that the Kansas Secretary of State’s office would take some action to address the serious management problems.

Because under state law, Johnson County leaders have no say over who gets hired — or fired — as the county election commissioner, despite the fact that the office is financed entirely by funds from Johnson County taxpayers.

“That statute was that they have complete authority and we have no authority,” Eilert said.

But Secretary of State Kris Kobach took no public disciplinary action toward Newby following the meeting. It was only after Newby accepted a position as the executive director of the U.S. Election Assistance Commission in November 2015 — a position he still holds — that details of the issues with the Johnson County Election Office under Newby’s leadership were made public. Newby was having an extramarital affair with an elections office employee he had given a promotion, and the two of them appeared to be making personal purchases with election office funds, according to an investigation by the Associated Press.

Despite Johnson County leaders being aware of serious issues with Newby’s management of the office, the county’s elected officials — who are directly accountable to the residents who provide funding for the election office — had no ability to discipline him or remove him from office.

It was concerns about the possible politicization of the election offices of Kansas’s most populous counties that led the state legislature to pass a law giving the secretary of state full authority over Johnson County’s election office — including naming the election commissioner — some decades ago.

But in the wake of the abuses of the office under Newby’s leadership and a tight gubernatorial election earlier this month that featured Kobach, the sitting secretary of state, as a candidate, the rules surrounding oversight and and management of the Johnson County election office are attracting renewed scrutiny.

Following Newby’s departure, Johnson County and the other more urban counties that have their election commissioners appointed by the secretary of state’s office pushed for a legislative change that would return a modicum of oversight authority to the county level. Changes that went into effect early this summer give Johnson County’s Board of County Commissioners the authority to approve the election office’s annual budget and require that all election office employees abide by the county government’s personnel policies.

Eilert and some other sitting members of the county commission say those changes were an important step in the right direction. District 1 Commissioner Ron Shaffer called the county’s ability to require election office staff adherence to county HR policies a “good thing.”

But others don’t think the changes go far enough.

Becky Fast, the Roeland Park city councilmember who is challenging Shaffer in November’s election, said that the “national embarrassment” that came from the long delay in reporting primary results earlier this month had led to questions about the trustworthiness of the current operations of the office.

“One problem with the current law is that Johnson County is one of only four counties where local taxpayers foot the bill for the administration of elections but have no say in who our Election Commissioner is as they are appointed by the Secretary of State,” Fast said. “The other 101 Kansas counties elect their election administrator. One step to restoring trust is to get the Secretary of State out of the business of controlling our elections and put it back into the hands of the citizens of Johnson County who are paying the bills.”

The Wichita Eagle’s editorial board broadly agreed with Fast’s take on the situation in a piece published last week.

“County commissioners would hold election commissioners more accountable because it is their constituents who have been failed when a county’s elections are disrupted by slow returns or problems at polling places,” they wrote.

County leaders standing by Metsker, saying he has made major improvements since becoming election commissioner

Current Johnson County Election Commissioner Ronnie Metsker has faced a good deal of criticism in the wake of the failure of the new voting machine system that he recommended for purchase — and the board of county commissioners unanimously approved — in May.

In addition to the problems with the voting system, some Johnson County voters have raised questions about Metsker’s ability to impartially oversee the tallying of results in the exceptionally tight GOP gubernatorial race given that Metsker owes his current position, which pays a salary of more than $100,000 per year, to Kobach.

But county leaders have vocally supported Metsker, saying that he had righted many of the wrongs that had plagued the office prior to his takeover.

“Ronnie has all of our support, even after the problems [primary] week,” Shaffer said. “He has done a lot of great things with that office.”

Eilert said that under Metsker’s leadership, “communication between HR, legal, the board and the election office is in a much better place than in some time.” And District 5 commissioner Michael Ashcraft said Metsker had done an admirable job overseeing a complex transition to a new voting system.

“Right now, I have full faith in Ronnie Metsker and am wholly supportive of him,” Ashcraft said.

LeEtta Felter, the outgoing Olathe Board of Education member who is running against Ashcraft for the board of county commissioners, called Metsker “one of the most ethical men of character that I know,” and said he had been responsive to security concerns about locating polling places inside schools that had been ignored by Newby’s office.

As for the fact that Metsker was the chair of the Johnson County Republican Party prior to his appointment to the election office, the irony of having the secretary of state appoint a local political operative to lead the election office when it was concerns about local political interference that led the legislature to give the secretary of state the authority to appoint the position in the first place is not lost on Eilert. But, Eilert said, the question becomes what structure would improve upon the current situation.

“The board of county commissioners could be just as politically influenced as anybody else,” Eilert said.

That’s an issue that strikes Ashcraft, often a vocal proponent of improving government processes, as worthy of long consideration.

“Is it ideal?” Ashcraft said of having the secretary of state appoint the Johnson County Election Commissioner. “I don’t know. I am always willing to listen to and consider ideas. But if the county commissions had the authority, that would open a whole new set of questions, too. I think the challenge is to always be aware of the situation and what the concerns with any arrangement are.”

Regardless, it appears that the structure of the election office may be among the issues that get a good deal of consideration in the fall county commission races.

District 4 commissioner Jason Osterhaus, who is running for re-election, did not respond to a request for comment on the issue.