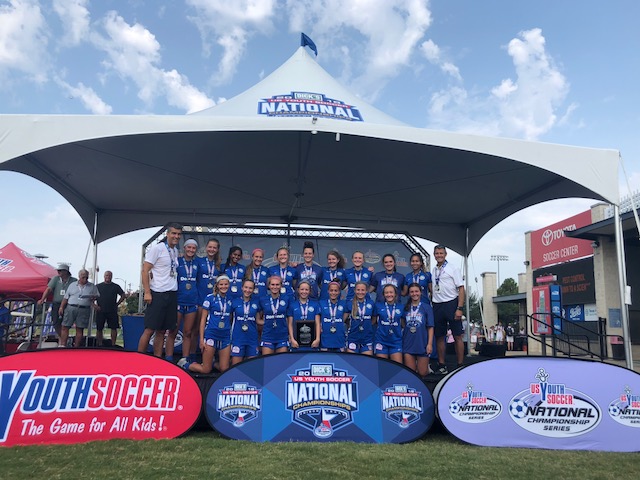 Two Shawnee Mission East girls were part of the club soccer team that was one game away from winning the US Youth Soccer National Championship this summer.

Caroline Chisholm and Karoline Nelson and the rest of the FCKC Academy Blues Elite ‘01 had beaten the California Rebels at least once before the big game. It was nonetheless a big disappointment when the Rebels took the only point 90 minutes into play, for a final score of 1-0.

Conquering regionals was “almost easy,” they said, since the team had a strong dynamic.

“It was just kind of a testament to how hard our team worked,” Chisholm added.

Chisholm said the team worked “super hard” to get to nationals, including morning and evening practices every weekday this summer.

“We just kind of found our rhythm, and maybe it was just another year of playing together, but it really just started to click,” Chisholm said, adding that many of the girls on the team had achieved their fourth state championship by now.

Nerves, excitement and confidence took FCKC throughout nationals, where they faced the toughest competition in the country, including the California Rebels in pool play.

Although losing the national championship was bittersweet, their proudest moment came when they received an outpouring of love and support from the Shawnee Mission community back home.

“What really stood out to me is someone texted me and said, ‘Although you did lose, it’s an amazing accomplishment to get to that game; think about the hundreds of teams who wish they had played in that game — who had worked the whole season to play in that game — so you should be so proud of yourselves that you made it there, and although you didn’t win, you can still say that you were there and you got second,’” Chisholm said.

FCKC ended up splitting into different teams after nationals. Ironically for Chisholm and Nelson, who play forward positions, they may end up playing against each other someday in club soccer.

“Right after when we were all leaving to get in our cars and go home, I went up and hugged one of my teammates,” Chisholm said. “I just remember starting to cry so much more, not because of the game but just because I knew that I wasn’t going to be playing with her next year and I wasn’t going to be with the same girls.

“It’s nice for Karoline and I because we still play high school together, so we’ll both be on the same team still at some point, but a lot of these girls live in completely different places from us,” Chisholm said.

Chisholm has decided not to play in college, while Nelson is still considering her collegiate soccer and college options.