Recognizing that responsibility, Johnson County district attorney and corrections departments are bringing context to data they have collected on juveniles and their cases over the past 20 years, to shed light on any discrepancies in the system’s treatment of youths of color.

The county is sharing that data and creating efforts to reduce Disproportionate Minority Contact, or DMC. DMC “occurs when youth of color come into contact with the juvenile justice system at a higher rate than their white counterparts. Nationally, youth of color are disproportionately represented at every decision-making point in the juvenile justice system,” according to the county.

Johnson County began collecting DMC data in 2008 to better understand the nature and causes of disproportionality locally. Reducing DMC is mandatory for state juvenile systems to receive $400,000 in annual Formula Grant funds, according to the U.S. Office of Juvenile Justice and Delinquency Prevention.

The Johnson County Juvenile Detention Center has been working since 2011 to establish a clear purpose for juvenile detention and also work to reduce unnecessary detentions.

“As you know, the youth is our future,” said Ulysses Wright with the Johnson County National Association for the Advancement of Colored People, which hosted a presentation Saturday on Johnson County’s DMC data. “This organization can help as they give us direction on how we may be able to help and assist the community in guiding the youth of Johnson County and the whole community of Kansas City.”

The Disproportionate Minority Contact sub-committee presented its findings to the Johnson County NAACP during its Saturday meeting at Shawnee Church of the Nazarene.

But numbers, percentages and ratios don’t tell the whole story, said Brian Seidler, project manager for the DMC sub-committee. Seidler said numbers only tell “what” is happening and not necessarily “why” or provide context or nuance.

“As we look at DMC, it’s critical that we delve into your numbers to see exactly what’s going on so you can really tell a story about what’s happening, where your areas of disproportionality exist and what then can you about that to fix it,” he said.

Of the roughly 18 adolescents currently detained at the Johnson County Juvenile Detention Center, about half of those are youth of color, said Don Hymer, assistant district attorney for Johnson County, said. But as fewer youths are being detained, even one arrest of a small group who are all the same race will “skew the numbers,” he added.

One main goal by the detention center is to reduce “all unnecessary detentions,” thereby reducing the number of youth of color in detention. In fact, declining detention numbers are already trending for the center. Hymer said the number of juvenile crimes has also declined since 2010, which means fewer youth, both white and of color, have been in contact with the juvenile justice system. 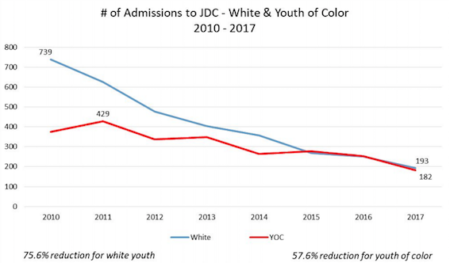 The detention center had 375 juveniles detained in 2017, compared with 1,113 in 2010. These are a result of changes to juvenile processes, such as issuing notices to appear in court instead of arresting youths, and also increasing house arrests, Seidler said.

The DMC sub-committee found that the failure to appear in court rate for youth of color was double that of white youths, a factor that contributed to the lower rate of reduction in detentions for youth of color. In fact, 66 percent of the youth in detention for failure to appear over a two years period were youths of color. The county juvenile services office has since revised that process to make it easier for youths to appear in court, thereby “dramatically” reducing numbers.

Sharon Brown, a Johnson County Department of Corrections representative of the DMC sub-committee, said one of their suggestions is providing text alerts to help youths remember their court dates. Other efforts are establishing school violence curriculum in the Blue Valley School District and providing outreach at Oak Park Mall for thefts.

Nonetheless, it’s still a work in progress. Johnson County will continue to collect and analyze data and evaluate the effectiveness of the changes.

One audience member, a retired schoolteacher, suggested that the juvenile office connect black juveniles with adults of the same race who can “relate” with them. Other audience members echoed her sentiments.

Brown said the juvenile services office also plans to engage more with the community, like the NAACP, to provide resources for families with struggling youths.

“We want to educate the community about the work that we’re doing, we want to look to build community-based partnerships to enhance reduction efforts, and we want to gain insight and perspective from non-system people in the community,” Brown said. “When you talk about the village mentality — we know all about that. It takes a village (to raise a child).”